When I lived in Atlanta, there seemed to be signs everywhere for Chicken and Waffles "Shacks". I mean even Motown Legend Gladys Knight had a chain that seemed to be in every strip mall*. Which at first I assumed meant they served waffles in the morning and fried chicken at night. Imagine my Northern girl surprise, when I learned about this heart attack inducing dish was a staple in Soul Food cuisine. I mean I had lived in St.Louis and spent time in Kentucky and Louisiana and never heard of such a thing. But any cuisine can vary from region to region. Take the French dish Ratatouille: It originated in Nice and was simply seasoned with thyme and black pepper but then those show-offs down the coast in Provence started adding all these green herbs and a bit of lavender and the flavor turned into something completely different. Well, Soul Food is no different**. You can go to a completely legit Soul Food restaurant in Texas and have a pretty different experience than you would in Florida or Tennessee. From what I gather, the epicenter of Chicken and Waffles is Georgia. At first it seemed strange to me but then when I thought about it. Is it really that much weirder than having a side of fried bacon or sausage? I mean it's savory and oily meat with sweet waffles.

So when I was putting together a menu for a vegan Soul Food dinner party, I started thinking of ways to veganize this classic unique dish while also making it a bit more healthy but didn't have a proper waffle iron to pull it off. $40 later and here we are enjoying Baked Vegan Chicken and Waffles. I have to admit I've fallen in love with this unusual but awesome combo.

Even if you can't make it tonight - You can still enjoy this Georgian country classic! If for not other reason than to add it to the list of things you've done in your life. 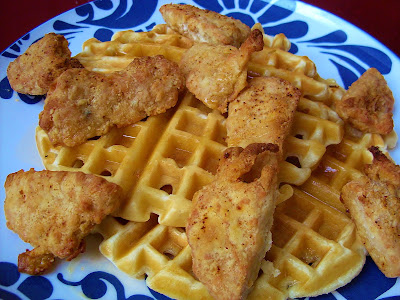 Cut your Vegan Chicken into strips or nuggets. Line a cookie sheet with foil and spray with Cooking Oil.

In a sauce pan, heat Margarine and Maple Syrup on a medium heat until Margarine melts. Then remove from heat.

Serve your Baked Vegan Chicken and Waffles warm with the waffles at the bottom and the baked vegan chicken on top and the syrup drizzled over the top.

* Ever been to Atlanta? That's a lot of strip malls.
** I am in no way an expert on Soul Food. This is strictly based on my experiences living in the South, eating at restaurants and internet research.