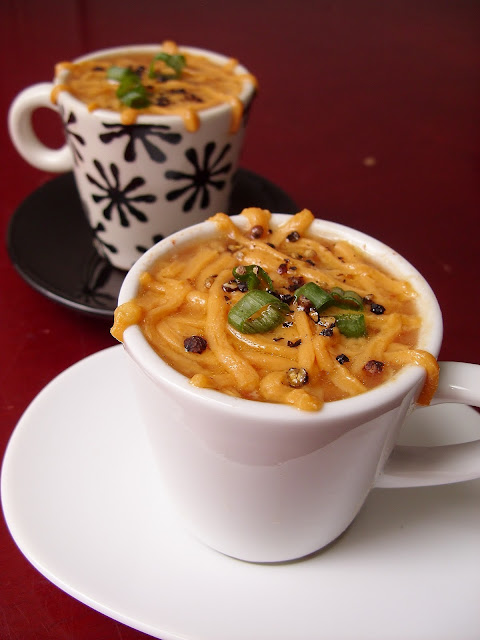 OK. I admit we might be pushing it a little bit by adding this to the Month of Baking but you do use your oven to melt the vegan cheese. I've also noticed a lot of Tweets and Facebook Statuses about runny noses and sore throats so I thought it might be a good time to post a recipe that takes your mom's tomato soup a step further.

Original bisques are French soups made with crustaceans that were too beat up to be sold in the market but over the years the term has also been used to also describe cream-based vegetable soups. Sometimes the term means both. So not the most compassionate soups on the block. We used fennel, sea kelp and some vegan sour cream in ours to make it a bit nicer to both sea spiders and our bovine friends. We decided to add the toasted crouton (that you can't see) and melt the Daiya vegan cheddar on top as a little shout out to tomato soup's BFF grilled cheese sandwiches.

I got the idea to serve the soup in espresso cups from Martha Stewart's Wedding page. When I was planning my wedding, I remember seeing it and thinking that it was a really adorable idea for serving soup to a large group of people and I wanted to share it in time for Thanksgiving. Soup isn't generally thought of as being part of Thanksgiving but if you're looking for something different, these little buddies might make a good opening course. We got a lot of emails last year from folks who served our Macaroni & Sheese Cups as starters at their family get together and loved them. So the individual serving soups in espresso cups that you can sip like you're pretend British and eat with those adorably dainty coffee spoons seemed like it could possibly make for the most adorable starter for any dinner party ever.

You can also enjoy it in a bowl. Yawn.

In your Dutch oven, heat all the remaining bisque ingredients except Garbanzo Beans, Vegan Sour Cream and toppings on a medium heat. You'll want to keep the pot covered and stir your bisque frequently.

Put your roasted Fennel and Onion in your food processor or blender with the Garbanzo Beans and Vegan Sour Cream and blend until smooth. Then add the puree to your bisque. When the soup begins to slightly boil, reduce heat to a simmer. Now at this point you can remove the Bay Leaves and use an immersion blender or food processor to puree the tomatoes into the soup but I liked keeping them as they were because I liked the texture but in a real bisque you would puree all the soup again.

Let your bisque simmer for 10 to 15 minutes or until it begins to boil. You don't want the bisque to boil too much because that might separate your Vegan Sour Cream but you want the bisque to simmer long enough that the Beans dissolve into the soup. You'll know it's ready when your broth is cloudy.

While your bisque simmers, toast your Croutons. You'll need 1 to 2 half inch thick slices of Baguette Bread per serving of soup. It kinda depends on how you are serving the soup and what will fit. The espresso cups only fit one.  Brush both sides of your Baguette Slices with Olive Oil and place them on a cookie sheet lined in foil. Bake in your oven that is already set at 400 for around 5 minutes and flip the Slices of Baguette and bake for another 5 to 10 minutes or until the croutons are toasted and a golden brown.

Fill your oven safe bowls or cups 3/4 of the way with Bisque, place the Croutons over the top and then sprinkle a layer of Daiya Vegan Cheese over the top and bake for 8 to 10 minutes or until the Daiya is melted. Sprinkle Green Onion and some Black Pepper over the top.