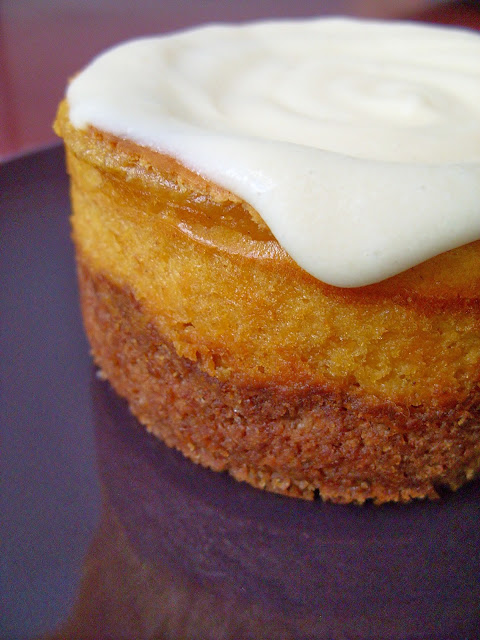 I haven't been sleeping all the great lately. It's not really anything to be concerned about. There is no real mystery as to why. I've been sabotaging myself by doing all kinds of things I shouldn't. I mean what do I expect if I watch American Horror Story right before I go to bed?

The other night I woke up in the middle of the night because the cats were bickering in the kitchen and my first thought in my slightly unconscious mind was "They must have cornered that troll* from the 1985 feature film adaptation of Stephen King's Cat's Eye." I mean obviously. Because that's what happens to your brain when you overdose on monster movies. AMC's Fearfest has had me in it's clutches for weeks now. I skip anything with any real gore and focus more on the classics like Teenage Zombies.

Between the leaves changing color and the black and white movies, it just felt like it was time to add a vegan classic to our little blog. Vegan pumpkin cheesecake is actually one of the first recipes I ever tried out on non-vegans back in my Olympia days when I worked at a domestic violence shelter as a sexual assault counselor. This recipe has evolved a lot since that first Thanksgiving cheesecake I brought for the families and residents in the shelter. That while I have fond memories of it, I am willing to admit was a pale shadow of this recipe. It's a much firmer and creamier pie. I've learned how to have a more logical head around pumpkin. I mean it's a fall tradition I respect but over the years my maturity has brought an understanding that sometimes you don't have to use the whole can**. I also have to admit the New Yorky style of this version's sweet almost cookie-ish crust makes it my favorite but you can also put this filling in a regular old pie crust and not sweat the spring-form pan. Either way, pumpkin cheesecake is awesome.

Vegan Spiced Cream Cheese Frosting Topping (We're recreating the whipped cream topping that you find on some New York Style Cheesecakes so this frosting is much softer than traditional frosting.)

In a bowl, mix the Crust Ingredients with a fork until dough forms; gather into a ball. Separate into 4 equal sized portions. One at time, press 2/3 of the dough into the bottom of a spring-form pan. Then use the remaining 1/3 of the dough portion up the sides of the pan to create a shallow cup. Once you've done that for all the spring-form pans, place all your spring-form pans on a cookie sheet. Bake for 3-5 minutes or until light golden brown than remove them and let them cool while you make the filling.

In a bowl, mix all the Filling ingredients (please note the Vegetable Shortening is only for greasing the pan - don't add any) on a low speed until well blended. Using a ladle to fill your pans a little more than 3/4 of the way to the top. Don't fill to the brim because your cakes will bake over.

Reduce oven temperature to 200. Bake for an additional 30 minutes. Cheesecake may not appear done, but if a small area in the center seems soft it will become solid when it cools. Don't do the toothpick/bamboo skewer test. Turn off oven, leave Cheesecake in the oven 30 minutes longer. Remove from oven and cool in their spring-form pans on a wire rack. Without releasing or removing side of the pans, run a small metal spatula or a butter knife carefully along the side of the Cheesecake to loosen.

In a mixing bowl, beat all the frosting ingredients except Powdered Sugar with an electric mixer on low until smooth. Gradually mix in the Powdered Sugar, 1/2 cup at a time on a low speed to prevent one of those messy blow backs. Mix till smooth. This is really soft frosting so I recommend using a frosting gun to make an even layer over the top of the cheesecake while it is still in the pan.

Refrigerate uncovered for at least 7 hours.

Run metal spatula or butter knife carefully around the side of the Cheesecake to loosen again. Remove the side of the spring-form pan. You can leave your cute little pleasecakes on the bottom disk when you serve them. It will help prevent anything crazy from happening in transport***.

* Yes, I know that the troll story in Cat's Eye was actually written by Stephen King for the screenplay and doesn't appear in the collection of short stories titled Night Shift with the other scenes but still since 2/3 of the movie is adapted, I tried not to think about it too much. Sometimes you just have to roll with it.

** And of course there was the ex-girlfriend incident that created an illogical anti-pumpkin sentiment that I am just now coming to terms with.