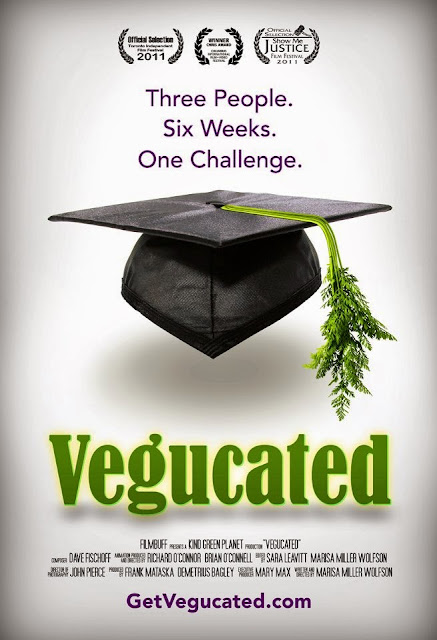 It's a scientific fact that for centuries, New York City has attracted a higher percentage of the most talented and creative people in the world than the original York (or as some might call it, Old York City). When we moved here, I have to admit I was both excited and intimidated by this. I mean if we're being honest here, I'm more Brooklyn than Manhattan, and sometimes I'm pretty sure the Manhatteners can spot it. How could they not? But tangents about my awkward nerdness and the social dynamics between these two neighboring boroughs aside, we were both excited about moving to New York because the few people we knew here were part of that talented and creative demographic I mentioned earlier who are busy doing some of the most amazing things to make the world a better place for animals. A lot of those spectacular people were at the New York City Premiere of Vegucated last week.


It was a sold-out show with an audience of 500 beautiful people dressed for the red carpet in a city know for its fashion.  But people weren't just there to get their picture taken; this crowd came ready to see this new feature-length documentary that followed three meat-loving New Yorkers experimenting with a vegan diet for six weeks. I know I've been raving about this film a lot lately, but I just got so excited when they won the award for Best Documentary at this year's Toronto Independent Film Festival. It's the kind of film that everyone - even the most experienced activist and hardcore vegan - should see. It reminded me of the days when I first made the choice to go vegan, what it was like to become the kind of person who cared about what I ate, and realizing for the first time the implications of my eating habits on others.

I won't lie. It won't be like some highschool yearbook that only shows the fun parts. You'll laugh, you'll cry, and you might even blush a bit; but you'll be glad you took this trip down memory lane by proxy. Every vegan's story is different. Some people are like me, and decided in some kind of lightening bolt moment that they didn't want to contribute to the suffering of animals and went vegan on the spot. But for others it was a growing experience that took time and a little effort to find a way that worked for them. I think it can be easy to forget that journey when you've been vegan for years and your closest friends are vegans and activists. Watching Vegucated didn't just remind me why what we do is important, it also has some encouraging and inclusive messages that people at any stage in the vegan spectrum** can relate to. Plus, I couldn't be happier or prouder of my friend Marisa Miller Wolfson. I mean seriously, how many people can honestly say they're a documentary filmmaker? And no I don't count all those people who say it to get women into bed... that's why I added the 'honestly' part.

Back to the event! The food was remarkable! Brooklyn's own V-Spot served their infamous black bean empanadas. There was actually a pretty notable spread featuring food from quite a few of New York's Vegan Hot Spots like Candle Cafe, FoodSwings, Cinnamon Snail, and Verite Catering. Even Sweet & Sara vegan marshmallows to dip in a dark chocolate fountain. And of course we can't forget Smuttynose beer from City Swiggers and organic wine from Frey Vineyards. They even had some of my favorite frozen treats from Soy Delicious.  I know I've said it before, but it bears repeating: no one loves food like a vegan! You had to be brave and assertive to get the good stuff from the buffet table. If it wasn't for Dan, I'm pretty sure I would have starved.


We had great seats between Matt Rice from Mercy For Animals and the Cartoonist and longtime Animal Advocate Dan Piraro and his wife Ashley. If you've never met Ashley, you should know that she is probably one of the most passionate and exciting activists on the planet. Lord only knows how many animals she has saved just by being awesome. We got to see Chloe Jo Davis from Girlie Girl Army, which is always pretty much the definition of 'Vegan Treat', and catch up with more friends than I can name.

Between the film, the food and the friends - it was one of the first nights of hopefully many that reminded me why this is the best city on Earth.

If you haven't seen Vegucated yet -  The Let's Get America Vegucated! Autumn 2011 Tour is currently underway and might be coming to a theater near you soon! Click Here to find a screening near you!

* The skirt is part of H&M's New Conscious Collection, and this photo is a great reminder on why I need to remember good posture. SIGH.

** The Vegan Spectrum - I like to think that inside everyone is a vegan waiting for their chance to get out. Some of those inner vegans are completely free to live and explore all aspects of a cruelty-free life with no exceptions and for others that vegan is only allowed out to enjoy a cute LOLcat... but I have a hope that even the furriest wearing, meatiest eating, heart-of-ice hunter will someday have that personal moment many of us have had that made being a vegan make sense and work for them. They'll let that inner vegan out and start making choices that reflect that innate compassion for animals so many of us started out with as children. I mean there are very few of us out there that were born vegan and if we can make this choice why can't they? I'm believer that there is always enough room in the Vegan Club and everyone is welcome.