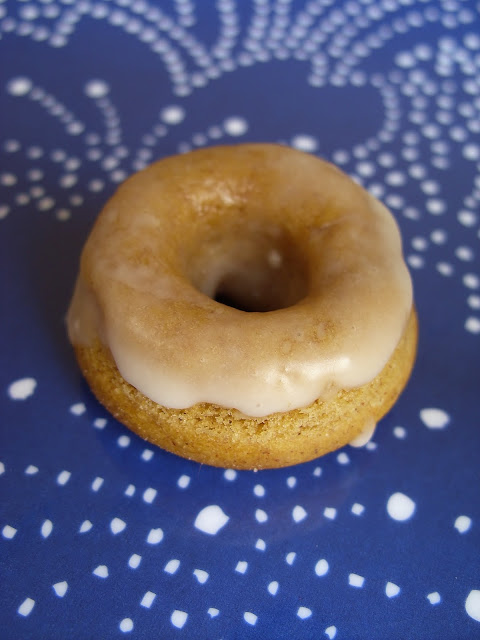 I've been finding it really hard to explain what I did this weekend. I'm not sure where to even begin. I guess that's why I'm posting this on Wednesday. See, I've been on the verge of an anxiety attack since last week... in a good way. But rather than throw all my news and stories in one huge blog post you won't even read (because let's be honest today's recipe is pretty awesome), I'm going to do something really mean and drag this out over several posts this week. Shall we begin?

These donuts - these mini pumpkin donuts* - were made for a lovely vegan baby shower brunch I went to on Saturday for the beautiful Leinana Two Moons. You might know her as the talented veganista behind Vegan Good Things. I know her as my friend. In a recent twitter conversation we discussed her love of pumpkin and my aversion to this classic autumn flavor since a childish incident with Dan's ex. It's a dumb story I won't bore you with, because to be honest this is a happy place where we don't bore each other with stories about jerk faces. Also, the story might make me sound like I keep crazy grudges**, but the truth is that pumpkin is delicious and the annual pumpkin treat flood is one of the best things about fall. I am adult enough to admit that.

This is a recipe I was saving for the donut section of our book, but there will be plenty of other unreleased recipes for that, and I really wanted to make something special for Leinana. I know I make jokes all the time about being socially awkward and shy, but it is real. Having Leinana include me in her circle of friends when we moved to NYC has meant the world to me. Also, I got to enjoy a huge plate of some of the best vegan food ever at her baby shower with some of the most amazing vegan ladies in the city: Marisa Miller Wolfson, the extraordinary activist and documentary film maker behind Vegucated; Hope Kandel, my nominee for a Nobel Prize in Super Awesome for being the food genius behind Foodswings; and the cruelty-free fashion maven behind Lifestyles of the Chic and Vegan (whose name I'm leaving out because I don't see it on her pages and I'm not one for outing folks)... just to name drop a little. Seriously though - you should check out these photos to be inspired to plan your own vegan brunch ASAP.

And when you do - include these prefect little buddies that are just the right amount of spicy and chewy and cakey and yummy. Yeah. I said "yummy" like a 4th grader and I sincerely meant that "yummy". These donuts will make you do and say all kinds of things. They're like little shots of Vegas. Enjoy!

Once your dough is thoroughly mixed and has formed a paste, spoon your dough into either a pastry bag or a cupcake decorating gun and attach the largest tip.

Spray your mini donut pan. You know the one you used to make the Mini-Chocolate Covered Coconut Donuts a few weeks ago.
Fill your doughnut rings 1/2 way with dough.

Bake for 4 to 6 minutes or until the tops of the donuts spring back when you touch them.

Keep in mind the bottom of the doughnut will be more golden than the top and there might be little air bubbles in the there but you can kinda hide them with the glaze. Put them on a wire rack to cool.

That's when you make your glaze! make sure your donuts are cool before you try to glaze them or they will get all melty and not work out. And I don't mean cool like this or this. I mean cool as in temperature.


Apple Glaze (this has a very light but nice apple flavor)


In a small bowl, whisk all the ingredients except Apple Juice until blended. Then add the first teaspoon of Apple Juice and blend with the whisk. The Sugar will start to dissolve. Keep whisking the glaze to break up any clumps. If the glaze seems took thick add a tiny bit more Apple Juice till you like the constancy. Remember you want to be able to brush the glaze over your donuts but not so liquified to the point it won't dry to create a nice "shell".

Then brush the glaze over your donuts or dip our donuts in the glaze and let dry on a wire rack.


Enjoy with a big cup of Vegan Almond Chai and some images of pugs in Halloween costumes.

* It's OK to pause here to deal with all the awesome going on. Catch your breath. We can wait.

** Sometimes I do that, but to be fair, have you ever heard of a grudge that didn't involve at least one person being a little crazy? Those valid grudges seem rare.
Posted by Annie at 7:22 AM