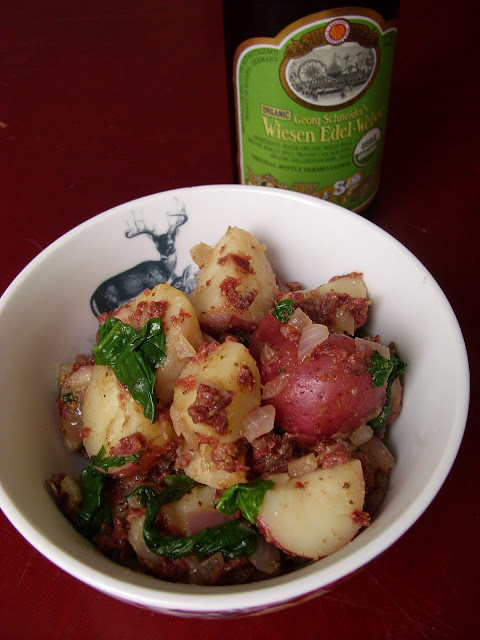 I'm not German but I love love love Oktoberfests! I mean what's not to love? Polka dancing, pretzels, cheap random imported beers, sauerkraut, beer brats (vegan of course) and all kinds of other awesome-ness. When we were in Budapest we hid out from a biblical thunderstorm in a German-fest tent (not an Oktoberfest but it had the same vibe) and watched some pretty amazing accordion* accompanied karaoke. Of course in Budapest around May Day festivals aren't hard to find but it was one of the best nights we had there during one of the best weeks ever. This month we're going to be Deutsching it up with a handful of vegan recipes to help you rock-toberfest!

In America, we're used to our potato salad chilled and with more mayo than potato but in Germany there is a very popular dish called Kartoffelsalat that is actually a potato salad served warm and with bacon.We made our own tweaks of course on Betty's Recipe to make it our own vegan noms and so you can add this side to your party with some Roasted Vegan Black Pepper Beer Brats (recipe also included)! I know! two recipes in one day! It's OK to say "Hölle ja!" right now.

I know I promised news to explain my bad blogging habits lately so here ya go : I recently resigned from my job to focus on this blog and our upcoming book full-time. This is going to be my last week balancing working a full-time (plus) job and busting through The Betty Crocker Project! It's been a bit of a challenge wrapping up a job I've had for 6 years but it's time. I'm sure you don't want to hear about that though... you want to hear about the contests and guest posts we have lined up this month for Vegan MoFo but this isn't a time for spoilers... Now is when you need to open a bottle of your favorite Bier, put on some Hasselhoff and get on your Pleiderhosen**! 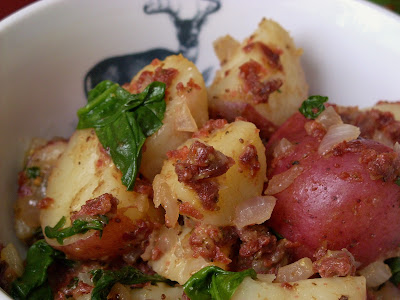 Boil your Potatoes till they are tender. Drain and let cool a little while you make the rest. It will help firm them up a little but before they go in the salad.

Heat Olive Oil and Liquid Smoke in your geliebt cast iron skillet on a medium heat.Once your Oil is hot, toss in Onions and cook until they begin to get tender. Then add Flour, Sugar, Onion Powder, Braggs, Celery Seed, Dijon Mustard (optional) and Nutritional Yeast and mix with spatula until blended.

Add Potatoes and cook while flipping and mixing occasionally. You want to get an even coating on your Potatoes. Be careful so your Potatoes don't fall apart.

Add Wine, Water, Vinegar, Thyme and Spinach. Continue to cook while flipping and mixing occasionally. When you liquid is about half way cooked off, add Vegan Bacon Bits. Continue to cook until the liquid cooks away enough to make a light sauce.

Toss a little Salt & Pepper on to taste!

In a small glass baking dish, mix Beer, Oil, Liquid Smoke, Black Pepper Corns and Onion Powder. Then add Beer Brats and use a spoon to make sure they get an even coating of the Beer Mix. Place Red Onion slices over the Brats. Place in the oven for 15 minutes. In the same way that some people like burgers BBQed to different levels so keep an eye on your Brats and pull them out when they browned to your preference.

Then use a spatula to move the Onions to be under the Brats. Rotate the Brats so that the darker side is underneath. Use a spoon to "bast" the Brats with the Beer Mix. Place in the oven for another 15 minutes.

Bast the Brats again and rotate them and put back in the oven. Remember to pull out your Brats when they reach your preferred level of "brown".

Serve with some Sauerkraut, Mustard, Pickles... whatever! Go nuts. I will brag a little bit here that another reason I'm really excited about our Vegan Oktoberfest is that it gives us an excuse to take advantage of living in Brooklyn... a magical land of Old School Jewish Delis! Where the pickles are the size of free-range corgis!

PS - I wish it was a tradition to give presents for Oktoberfest because I LOVE this!


* Accordions are so cool!