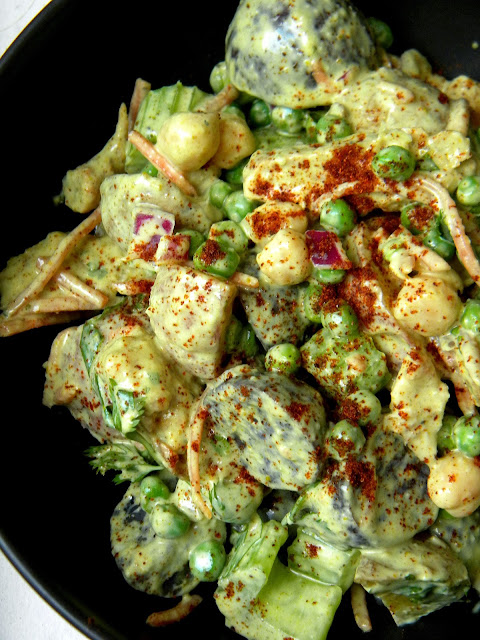 At this point in the summer, you probably have a few BBQs and potlucks under your belt. You've fired up your grills and eaten a few meals outside in the sun. I have no doubt you've also enjoyed a few pasta and potato salads... the vegan's loyal summertime friends.
If this salad were in the Olympics, it would be the triple axel triple toe loop that would have brought the 80s Eastern European judge to tears. We combined two summertime favorites, Chicken Salad and Potato Salad, and added a warm seasoning twist to this classic and often overlooked chilled dish. We're taking this "side" out of the shadow of those showy pies and veggie burger headliners; just like how Star Trek: The Next Generation began as a spin off of a wildly popular cult classic, but with some tweaks here and there came into its own, and some would argue is superior to the original*. You know what I mean... don't act like you're too cool for Star Trek.
You know what else is cool? Kittens with blogs! Many of you already know Aggie from her many appearances on Facebook and Twitter, but now she has her own tumblr! Yes, my loyal lurkers and dearest friends, that tumblr I started months and months ago has finally found a purpose**... to bring more cat wisdom and adorable cat photos to the internet masses. You can find this much-needed resource in our right hand column: just click on the cat. We're just getting started, so that wisdom is still kinda bare, but give it time and be sure to check back to see what crazy cat adventures Aggie has. I feel pretty confident in guaranteeing they will be ridiculous***.
OK. Let's do this. To the veganaise!
Curry Vegan Chicken & Potato Salad
Heat oven to 400.

In a shallow glass baking dish, toss Vegan Chicken, Potatoes and Olive Oil until everything is evenly coated. Bake for 20 minutes or until the Vegan Chicken and Potatoes are a light golden brown and have a light crispy crust. Cover with foil and put in the fridge to chill for 30 minutes.

During that time mix remaining ingredients except Paprika in a large bowl until they are completely blended. At this point you should only add 3/4 a cup of Veganaise. After you add your Vegan Chicken and Potatoes, you can add more Veganaise if you want your salad to be creamier. Put your Veganaise and Garbanzo Beans in the fridge and let them chill for 10 minutes to help blend the flavors.

Sprinkle some Paprika over the top and enjoy!


* I won't judge you if you are one of those but I'm more old school that. In other words, I'm an old grump and can't admit new things can be awesome too. (insert grumble-grumble here)

** My deepest apologies to those who were already following this tumblr and were sad that nothing was ever posted.

*** The title of this post is 10xs cuter after you've seen this classic internet sensation.
Posted by Annie at 8:33 AM