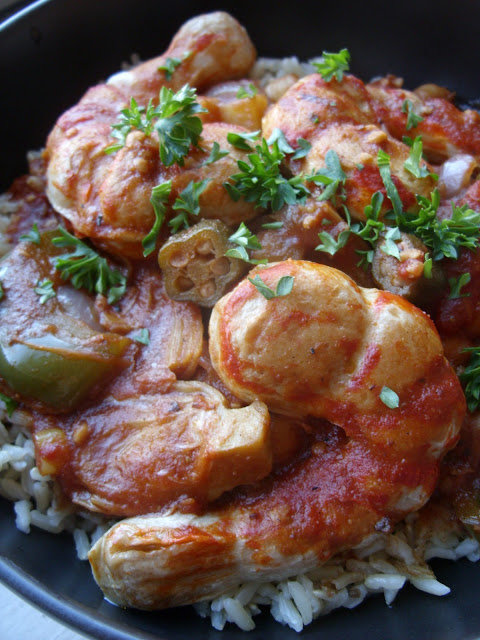 I have always loved Creole and Cajun food. I have spent huge portions of my life dreaming up ways to veganize old school Louisiana favorites like Beighnets, Po'Boys, Hush Puppies, Hoppin' John, Red Beans and Rice and Jambalaya. Hell - we even deep fried a Tofurky. So I guess I don't need to rave about how excited I was to make Betty's Shrimp Gumbo. Here's the thing...

Have you ever been making something and you get to a step in the recipe that makes you pause. Everything in you says - This recipe is perfect the way it is. If I do this - will it really be better? That moment when your heart says it's time to stop but you can't help but continue. There were 2 moments in this recipe where I wish I had the ability to turn back time :
Enough chatter - Let's start making this dish that is still so good it will make you smack your mama*... I mean Betty always brings it.


Easy Vegan Shrimp Gumbo
In your mon cher cast iron skillet, heat Olive Oil and Liquid Smoke on a medium heat. Once the Oil is hot, add Sausage Coins, Artichoke Hearts and Vegan Shrimp. Then add a dash of Beer. Stir occasionally and let simmer until the Sausage begins to brown. With a slotted spoon remove the Sausage and Shrimp from the skillet and set them aside.

Now add the Margarine and let it melt. Toss in the Red Onion, Green Bell Pepper and Garlic and let cook for 5 minutes. Then gradually stir in Flour. Cook over a medium heat until it begins to bubble.

Now add the remaining ingredients except The Shrimp Mix, Rice and Parsley to the hot Oil and Beer and let simmer for 10 to 15 minutes. Serve the cooked Shrimp, Artichoke Hearts and Sausage over the Rice with the Sauce/Soup and Parsley over the top.You'll want to add enough Sauce/Soup that it well becomes a Soup. You'll mix it all up in your bowl before you eat... you may want to invest in some dipping bread too. Not that I would tell you what to do or anything.

*This is just a saying. The Shannons do not condone or endorse mama smacking.
Posted by Annie at 7:11 AM