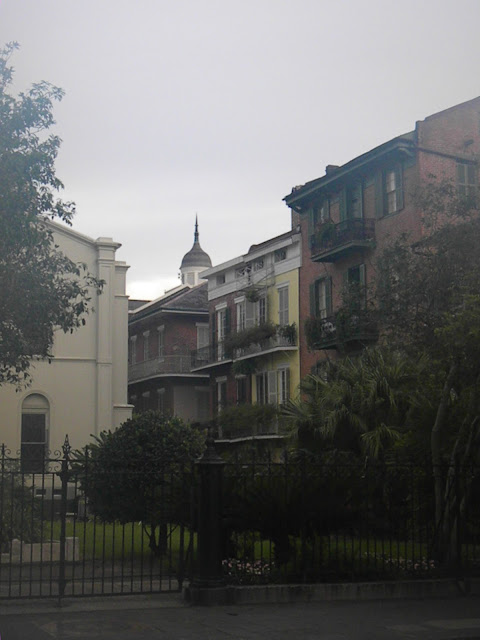 Morning on Bourbon Street
Even in a magical place like New Orleans, they don't eat Beignets all day.
When we were there about a year ago, one of our most memorable meals was vegan Po' Boys at Cafe Bamboo. So it only seemed right that we should make a few for our stay-cation. We had brought home a few postcards from NOLA with recipes for Creole & Cajun dishes that I wanted to veganize, and some day I'll share my version of artichoke soup that will make you do this*. This weekend we did an overhaul on the Hush Puppies postcard recipe to go with our Po' Boys.
Traditional Po' Boys are usually made with deep fried seafood of some kind; like shrimp, crawdads, or catfish. There are as many versions of Po' Boys--ranging from seafood to roast beef --as there are urban legends about where the name comes from. My favorite story is that the name comes from the free sandwiches a New Orleans restaurant owner gave to the street car conductors during their strike in 1929, so they wouldn't have to cave to feed their families. Back then, seafood wasn't as expensive as it is these days, and catfish and shrimp would have made up a cheaper sandwich then one with pork or beef. Hence these were sandwiches for "Poor Boys". As someone who grew up in a Union house, I kinda love that story.
Whatever the origin, Po' Boys are tasty. We made vegan Dressed Creole Shrimp and Bourbon Street Chicken Po' Boy Shorties with Creole Veganaise and vegan Hush Puppies. The recipes and photos for all 4 are below--and the fancy veganaise is so worth it. 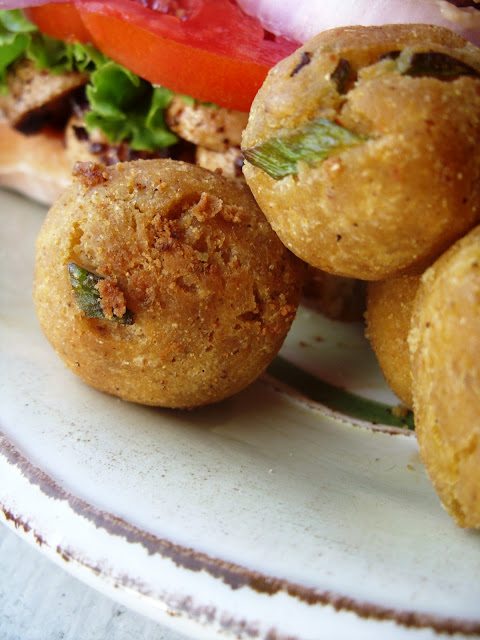 In a large bowl, mix Corn Meal, Flour, Braggs, Baking Powder, Baking Soda and Sugar. Then stir in the remaining ingredients. Once you have a nice smooth paste, form the batter into small balls that are about the size of a spoonful.
Grab your darling cast iron skillet. In there, heat the Olive Oil on a medium heat. Drop the Hush Puppies in to fry once the skillet is hot. Use a spatula to move/roll them around once in awhile to make sure they cook evenly. They're going to take about 10 minutes tops to fry. Take them out when they're golden brown and put them on a plate with a paper towel to soak up the extra the extra Oil. I ate mine with some extra BBQ sauce to dip them in; Dan likes them all on their own. So, just follow your heart. 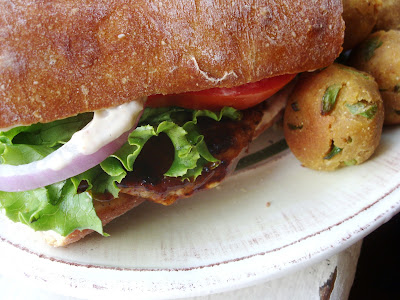 To make your Dressed Po' Boys, you're going to need following:

I'm sure you know how to make a sandwich, but I will tell you this: you want to put the Creole Veganaise on the top and bottom of bread.

In a large bowl, mix all the ingredients and out in the fridge to chill till ready to use.

Here are the stars of our Po'Boys:

Heat about 2-3 Tablespoons of Olive Oil in your cast iron skillet sweetheart on a medium heat. If you are using Match, toss them in there to brown a little on each side.
In a large bowl, mix all the ingredients except the Vegan Chicken with a hand mixer. Make sure it is smooth and you like the taste. If it's too hot, add more Catsup; if it isn't hot enough, add more Hot Sauce.
Then take your Vegan Chicken and dip it into the Bourbon Sauce. Cover it evenly on both sides and then toss it into the skillet. Flip it a few times and really keep an eye on it. The Bourbon Sauce will cook onto the Vegan Chicken into a thick coat. Take them out of the skillet and put them straight into your Po' Boy. You'll want to get any extra Bourbon Sauce to spread on the Vegan Chicken. Just trust me. 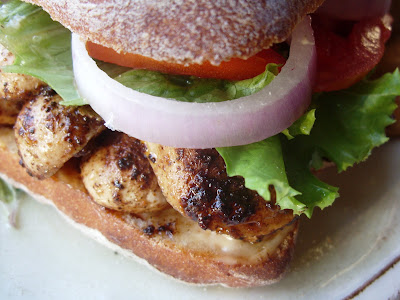 Heat your Olive Oil on a medium heat in your friendly neighborhood cast iron skillet.
In a large bowl, mix defrosted Vegan Shrimp with the remaining ingredients. Make sure to get a heavy even coat on the Vegan Shrimp.
Once the Oil is hot, toss in Spicy Vegan Shrimp and fry 'em up!

*Isn't it cute how much fun those older folks are having? I especially like it when they high five.