The Betty Crocker Project : Beer & Cheese Soup with a Popcorn Garnish and a side of Smokey Collard Greens & Bacon 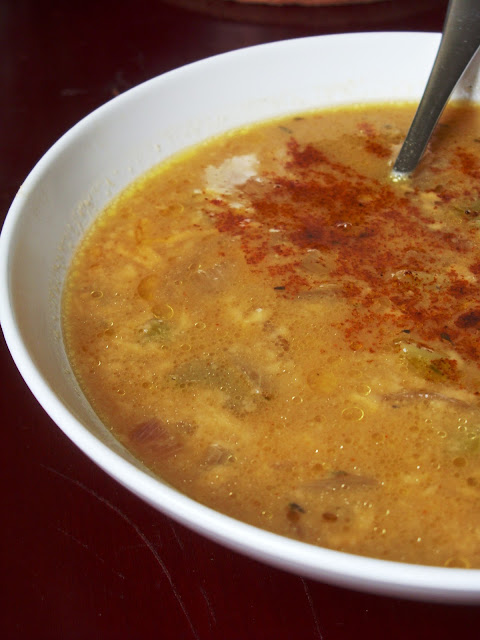 Last night, a small group of weary wooden travelers arrived on our dining room table. They had just completed a long journey to start a new, octagon-shaped life on a little island named Cataan. In the end, there could be only only one to settle this island rich in ore, brick, sheep, wood and wheat; and last night Dan had the dice on his side. That's right Shannon; I'm calling you lucky. Love you.

You may remember our buddy Chris from his previous roles in Pizza Dip and Dan & Annie - The Wedding. Well, last night he took a night off from stacking bills and breaking hearts to come play a board game with us and be the test subject for Beer & Cheese Soup.

Beer & Cheese Soup may sound a bit odd to some, but in reality it's pretty tasty stuff. We were comparing it to French Onion Soup; the rich "beefy"* and savory flavors, the cheese mixed in and bread for dipping. This soup was amazing! It would be a really great fall dish, so we may have jumped the gun a bit, but I'm ready for the leaves to change and to start baking again.

We paired this with Smokey Collard Greens (a version of Betty's Spicy Collard Greens) and some fresh Limeade. Mostly because now that I have this dreamy Limeade recipe, I want to drink it every night.

The whole dinner was Ore-mazing! Yes, that's a Settlers of Cataan joke, but still totally true.


In a pretty big pot or 2 qt. sauce pan, melt Margarine on a medium heat. Once melted, toss in Onion and Celery and stir to evenly coat the vegetables. Let them cook until they start to get tender, stirring occasionally.

Stir in Flour, half of the Nutritional Yeast, and Lemon Pepper. It will make a kinda smooth paste; watch out for clumps. Then stir in Beer, Bouillon, Olive Oil, Braggs and Liquid Smoke. Heat to a boil, let it boil for one minute, then taste. If it's too salty, add more water one Tablespoon at a time. If it needs more salt, add Braggs one Teaspoon at a time.

Then, gradually stir in Daiya Cheese. Heat at the lowest temperature. Keep checking, and remove from heat once the Daiya melts. Serve with a dash of Paprika over the top and some bread to dip in it.

Now Betty also suggests serving it with a Popcorn Garnish, which was really good! I mean GASP. Her recipe for making Popcorn on the stove has convinced me to never buy microwave popcorn again. Where we live it is kinda impossible to find organic microwave popcorn, but now that I know how to make it on the stove top, I don't need to sweat it. And now you don't either.


In a 4 qt. Dutch oven, add Popcorn and Olive Oil. Rotate the Dutch Oven so the Popcorn and Oil spreads out evenly. Cover and cook over a medium heat until the first kernel pops. Remove from heat and let stand while you count to 45. Then return to heat.

Cook, shaking the pan occasionally, until Popcorn stops popping. Immediately pour it into a serving bowl. You can sprinkle it into your Beer & Cheese Soup as a garnish; it gives the soup some more texture. Or, you can just sprinkle your bowl of Popcorn with Nutritional Yeast and/or Tony Chachere's Creole Seasoning if you want to really live and have a nice snack to enjoy while you build wooden cities out of wheat and bricks.

We went with a side of Collard Greens because they looked really good at the store and we've been feeling a bit Southern these days. 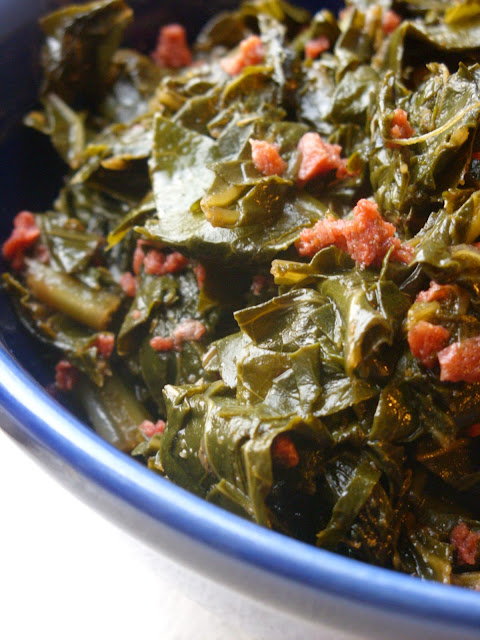 In a 4 qt. Dutch oven, heat Water to a boil. Add the Collard Greens, You're going to need a slotted spoon to push them down to fit them all in there. Boil for 30 minutes.

Meanwhile in your handy cast iron skillet, heat Olive Oil and Liquid Smoke on a medium heat. Once the Collared Greens have changed color and are soft, move them into the skillet. Add the remaining ingredients one at a time, and mix to get a even smooth coating over the Greens. If it's too salty for you, just add more Olive Oil 1/2 Teaspoon at a time. Not salty enough? Add Braggs 1/2 Teaspoon at a time. Just taste them to figure out that you like. Let cook for around 3-5 minutes


*No Burt Reynolds were hurt in the making of this soup.
Posted by Annie at 5:44 AM