Special Edition : Jambalaya and a tribute to Cafe Bamboo 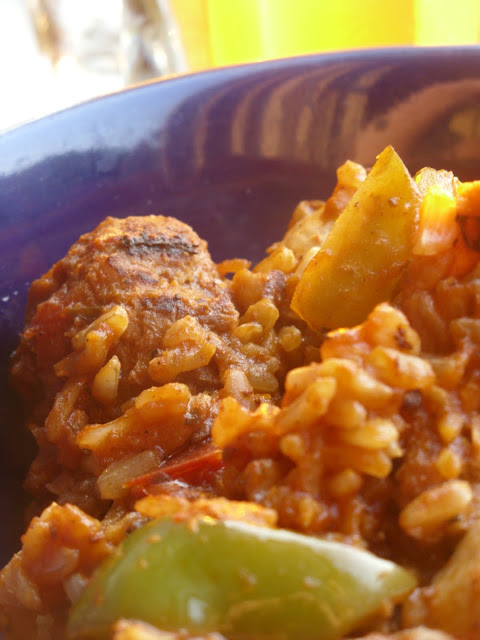 We recently heard some sad news.

Dan and I went to New Orleans for our honeymoon last summer. It was pretty hot, Dan caught a cold, and we saw alligators. Basically, we had an amazing time in one of the most charming cities in the country! The best part of the trip was being pleasantly surprised by all the delicious vegan Creole, Cajun, Soul and just plain ol' Southern food. I mean, we enjoyed Po'Boys, Key Lime Pie, Gumbo, Sweet Potato Fries, Cajun-Spiced Veggie Burgers, and Fried "Chicken". One of the best spots was called Cafe Bamboo.

I've eaten at vegan restaurants all over the world, and Cafe Bamboo was easily my top 10 favorite spots. That's why it broke my heart to hear they're closing their doors, and that there are people who won't get to experience their awe-inspiring take on vegan Cajun, Creole and Soul food. We're dedicating this Jambalaya to those folks at Cafe Bamboo.

Good luck to you guys, and I hope to hear you'll open your doors again someday!

In your cast iron skillet beaux, heat the Olive Oil and Liquid Smoke at a medium heat. Brown the Italian Sausage and Red Onion in the heated Oil. Once the Sausage is cripsy and the Onions are tender, remove them from the heated skillet and set aside.

Then, throw in the rest of the ingredients, mix, and let simmer until it starts to boil. While you're waiting for it to boil, stir the Jambalaya to keep it from sticking to the side. Once it starts to boil, mix in the Sausage and Onions.

Serve with a tall glass of sweet tea or a cold beer - and maybe have a second one for Cafe Bamboo.