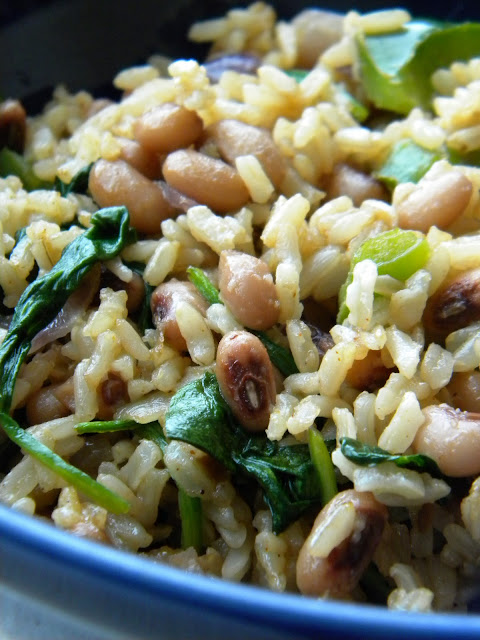 Around here is just wouldn't be New Years without some Black Eyed Peas.

It's kinda hard to say where the tradition started but everyone knows that eating these little cuties on New Years Day is thought to bring good luck and prosperity. The Talmud talks about eating bowls of black eyed peas on Rosh Hashana but in case you aren't friends with any Jews - that's in the fall. During the Civil War, these sweeties were cooked up with ham bones and collard greens, given a heavy dose of hot sauce and served with cornbread. Legend has it when Sherman marched through the South leaving a trail of ruined farms and burnt cities, he left these humble little peas alone thinking they weren't worth the trouble. Survivors left behind came to think of these legumes as being "lucky" - either because they survived the burning or because they helped folks survive the aftermath - maybe both. Some folks in the South take it so far they make sure to eat 365 peas on New Years so they never have a bad day.

This tradition is probably why Hoppin John has become of one of the most popular adapted West African/Soul Food dishes served in the South. I couldn't really figure out a good explanation for where the name came from but interesting Nerd Fact : There is a recipe for Hopping John in The Carolina Housewife by Sarah Rutledge, which was published in 1847. I love food history.

Our Hoppin Johns skipped the ham bones - but still has a lot of flavor. We just think that makes it luckier - for those sweet little pigs that is.


In your trusted cast iron skillet, heat Olive Oil and Dash of Liquid Smoke at a medium heat. Once it's hot, toss in the Green Pepper, Red Onion and Black Eyed Peas and mix. Stir in Creole Seasoning, Onion Powder and Greens. Once the Red Onion and Green Pepper are tender, mix in the Rice and Braggs. Let heat for around 5 minutes.

When you serve toss some Bac-Os on top - maybe some Hot Sauce and enjoy a New Years Tradition that you won't regret the next day.