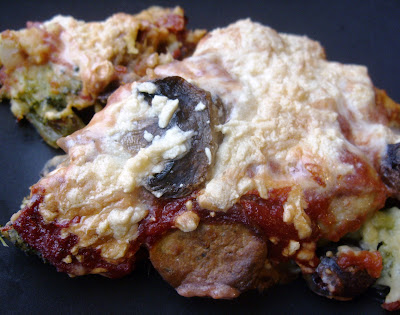 We've already seen Pizza Burgers and Pizza Dip. We all enjoyed the Stuffed Crust Pizza and the Ranchero Pizza. I still think about that White Pizza some nights when I'm feeling a bit nostalgic. But the other day, I found another recipe for The League of Extraordinary Pizzas that we're developing here.
If you're following along in your own Betty Crocker Cookbook, you can find this under Easy Mushroom Pizza Pie. It was an inspiring recipe with a good concept that wasn't that different than the infamous Cheeseburger Pie. But just looking at it, I knew we could do more.
I saw the promise for a dish with the works. A dish that could be more than a vehicle for soy cheese (not that we're opposed to that). So we maxed it out. In retrospect, I would have held back a bit--maybe fewer peppers or broccoli--but this version is pretty fantastic. It was fast and made a lot and went well with the second season of True Blood.
So ay-oh: let's make some Pizza Pie*!
Pizza Pie

Heat oven to 425.
Spray a 10-inch glass pie plate with cooking spray. In a bowl, mix Mushrooms, Yofurky, Onion, Broccoli, Olives, Sun-dried Tomatoes, Bell Pepper and Basil. Then, pour mix into your pie plate. Keep about 1/4 of a cup out and set aside to put on the top.
In a bowl, mix Nutritional Yeast, Soy Milk, Egg Replacer and Bisquick with a whisk. Blend until the mix is smooth. Pour over the Veggie Mix in the pie plate.
Bake for around 15 - 20 minutes, until it gets a nice crust but isn't perfectly brown. Spread Pizza Sauce over the top, and then sprinkle Veggie Toppings and Daiya Cheese over that. Bake another 15 minutes, or until the Diaya melts and gets kinda golden. Let stand for about 5 minutes before serving.

* I should let you know this isn't a Deep Dish Pizza. It's more like a Pizza Quiche or Pizza Bread. Still very tasty.
Posted by Annie at 6:54 AM