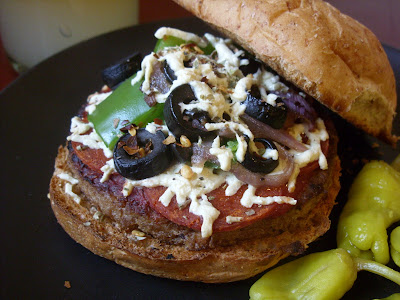 I woke up this morning with a song about Spider-man and Pizza Burgers in my head.* See, many people know they like Spider-man, but they aren't really sure why. Of course, there are the obvious things:

A. The trademark Spider-man flying-through-the-skyscrapers artwork. Let's face facts: it's sweet. It makes you feel like the wind is hitting your face when Spider-man chases The Green Goblin.
B. Witty banter
C. He's one of the first teenage super heroes who acted like an actual teenager. He's cocky (when he's Spider-man), makes bad choices, and is a sucker for some long-legged blondes and redheads.
D. He was also one of the first teenage superheroes who wasn't just a sidekick.

I think we like Spider-man because we like Peter Parker. He's a good friend and son (or nephew or whatever). Peter Parker, like the our loyal little friend the veggie burger, can always be counted on.

I have no idea how many veggie burgers I've eaten over the years. We travel a lot, and we take comfort in knowing that more and more places have a friendly neighborhood veggie burger these days. They've become a trusted friend to vegans everywhere.

Saying that, if veggie burgers are Peter Parker, the Pizza Burger is Spider-man. This burger kicks butts in a boldfaced, saucy style. It's a show-off; but who cares? It's AMAZING!

In your cherished little cast iron skillet, heat Olive Oil and a dash of Liquid Smoke at a medium heat. Add the Veggie Burgers. Once they start to brown, add Red Onions. Flip the Burgers a few times until they're brown on both sides. If the Onions are done cooking before the Burgers are done, you can always pile them on top of the Burgers to flavor the Burgers a bit.

While the Burgers and Onions are cooking, put your Sandwich Buns on your trusted pizza stone, open and face-down and in the oven. Remove when they're slightly toasted.

Sprinkle some Oregano and Red Pepper Flake over the Daiya Cheese and put the top half of the bun on.

Don't forget: with the great power comes great responsibility. So don't take the Pizza Burger for granted. It may seem simple, but that doesn't mean it won't rock your face.