So I'm back on my Mac today and I can't for the life of me figure out how to get the photo editor to flipping work... so not only is this not my favorite picture of this simple yet snazzy Thanksgiving recipe, but it's not frakking edited at all. Kill me. I have a much better photo--really beautiful, and you guys know how hard I can be on my myself--but it won't load. This whole photo situation is probably the most stressful part of this post.

As you may remember, we've been searching for vegan holiday roasts all over New York City. Last week after a pretty tramatic* doctor's appointment, I found myself wandering around near Central Park. That's when I found them. NYC's vegan holiday roast stockpile was being horded away at the Whole Foods at Columbus Circle. So like a good little food blogger, I grabbed as many as I could carry and put them on our credit card. I may have had a little buyer's remorse halfway home when my back freaked out on the subway; but all was forgiven by the time I was preheating my oven. See folks, I didn't just find the usual holy grail of holiday roasts... I found the new kid on the block that's causing such a stir. Yes, I found a Gardein Holiday Roast!

We're big fans of Gardein (obviously) so we've been looking out for this roast since we first heard rumors that it exsisted. And I am happy to report it lived up to our impossibly high standards. Seriously, I'm rough on products and don't post things I think will make anyone question a cruelty-free lifestyle. I think this holiday roast has great texture and flavor, and makes a great canvas for our Apple, Sage, & Molasses baste--which means it's great for anyone who wants to personlize their holiday a little. Yes, we did include tips below on how to level up the gravy that comes with your roast. The only thing I didn't love is the stuffing center - though I love that they included cranberries. Next time we make one, I might just have to get out our flavor injector and doll that up a bit. But really, who can complain about an excuse to make a big pot of your own stuffing?

Hidden in the back of a display of chicken-flavored stuffings was a lone Whole Foods brand vegan stuffing package. It was a great find for lazy, emotionally-drained me and gave me a great excuse to pilage Whole Foods anti-pasta bar. See, I've been playing around with this idea of making an Italian-themed stuffing for awhile now... it's an idea who's time has come. I love this stuffing so much, I had some the next day for breakfast and then like an hour and a half later for brunch. The idea of an Italian-themed stuffing with green olives, mushrooms, and artichoke hearts isn't new. I've been making artichoke heart "oyster" stuffing for years... but I really think the combo of the baste and this stuffing makes for a holiday meal that's both sweet and zesty. Yeah, I used the word zesty. It's a silly word, but it does a better job of describing this really unique and appetizing flavor than, I don't know tangy, savory, or like, piquant. Though piquant seems pretty prefect too.

Thanksgiving is almost here. I apologize for posting this so late in the season, but the clock is a-ticking so let's get started.


Preheat your oven using the directions on your holiday roast package.

In a saucepan, heat your apple cider vinegar over a medium heat. Once it begins to bubble slightly, whisk in the remaining ingredients except cooking spray until smooth. Heat to a boil and then remove from heat.

Spray a roasting pan with olive oil cooking spray, place your defrosted holiday roast in the pan, and brush a heavy coating of your Apple, Sage & Molasses Baste over the top. Make sure you get an even coating over all the exposed roast. Cover with foil and bake for 10 minutes and baste again. Bake for another 10 minutes and baste again. Remove the foil and baste again and bake uncovered for another 10 minutes. Now depending on your roast, you may need to bake it longer, or it might be done. Follow the instructions on your holiday roast package to see how long you need to bake your roast for. Once your roast is ready, take it from the oven and serve hot with gravy and stuffing. 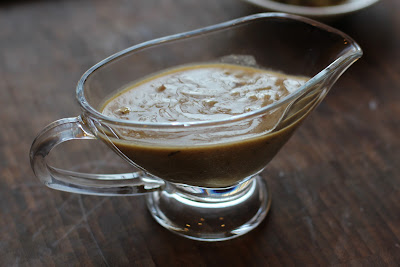 Now most holiday roasts come with gravy... a sad little package that is a little heartbreaking the first time you try it. Here's our attempt at dolling up Gardein's gravy.


So my mother-in-law doesn't really cook. In fact in that Shannon house, it's Dan's dad who makes the Thanksgiving meals. So in a way what I'm about to say doesn't make sense. But if my mom made stuffing** I'd like to think it would be this recipe. So maybe I should rename this Dan's Mother-In-Law Stuffing. For the recipe above, we dolled up Whole Foods Vegan Stuffing, but really any vegan stuffing will work.


Prepare your stuffing per instructions on the package substituting broth and olive oil for the water and butter and add onion, celery, Italian seasoning, celery seed, lemon peel, and garlic powder. Once your stuffing is ready and fluffed, mix in remaining ingredients.


*There were just a lot of needles and tests. Don't worry, there weren't any Terms of Endearment moments or anything like that.

**We weren't big on Thanksgiving in the house I grew up in. I refer you the story I told in The Thanksgiving Day Parade #6.