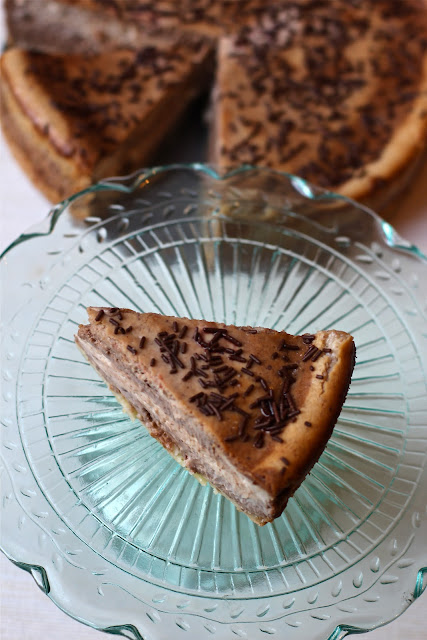 Almost 3 years ago, I became newly Irish-ed. See I wasn't born a Shannon. I married one. But somewhere deep down, maybe I always knew in my Mediterranean blood that I was meant to be Irish. Not to brag but I can do wonders with a potato. I adore green, plaid, cute fuzzy haired sheep and castles combined with overcast days.  Boil me a cabbage and I'll smile like you've just made me ice cream. But sadly I am still only faux Irish. So heading into St.Patrick's day, I thought it would make sense to start with a faux Irish treat.


Traditional Irish Coffee is actually a cocktail of sorts made with hot coffee, Irish whiskey, brown sugar and cream. We took those key ingredients and flavors and transformed them into pretty much the ultimate adult dessert. This vegan cheesecake also has a "buttery" shortbread crust that does more than just hold the cheesecake together. It completes it. It is also probably one of the easiest - yet extremely impressive - vegan treats you could make to impressive even the meatiest eater. Sadly though like its dairy ridden cousin, this cheesecake takes awhile to set. So we should get started. 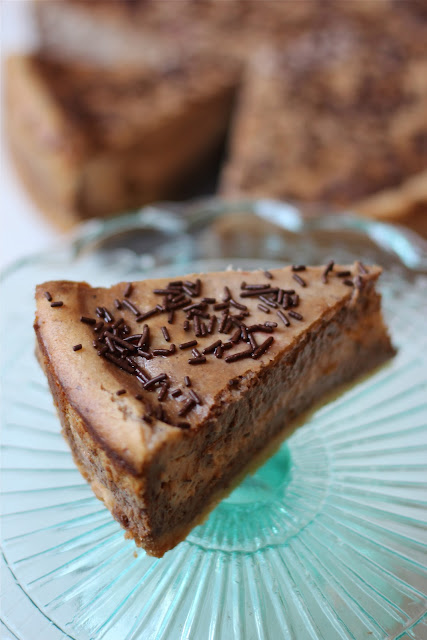 Lightly grease 9-inch springforn pan with Vegetable Shortening.In a bowl, mix the Crust Ingredients with a fork until it makes very small  - almost sandy - pebbles. Press your sandy pebbles into your springform pan in an even layer. Try to create a shallow bowl with the dough by gently pressing the dough up on the side a little. Put your pan in the oven and bake for 5-6 minutes or until light golden brown; cool. Heat oven to 475.In your largest mixing bowl, blend Vegan Cream Cheese, Sugar, Brown Sugar, Flour, Hazelnut Meal and Salt with an electric mixer on medium speed for about 1 minute or until smooth. Then mix in Applesauce, Egg Replacer, Vegan Sour Cream and Flaxseed on a low speed until well blended.

Now use your measuring cup to separate out 1 1/2 Cups of the Cream Cheese mix. Put it in another bowl and set it aside. In the large mixing bowl, blend Cocoa Powder and Coffee Powder into the larger portion of Vegan Cream Cheese until it is completely mixed. In the smaller portion whisk in your Whiskey.

Now pour your Coffee Cream Cheese mix into the springform pan and use a spatula to smooth it into an even layer. Then pour the Whiskey Cream Cheese over the top of the Coffee layer. Use your spatula to smooth it out into an even layer and if you're feeling fancy - swirly it a bit to create a lovely pattern like those you see on the top of schamncy coffees. Once your cake has an even top. Bake 15 minutes.Reduce oven temperature to 200. Bake for an additional 1 hour - no longer. Cheesecake may not appear done, but if a small area in the center seems soft it will become solid when it cools. Don't do the toothpick/bamboo skewer test. Turn off oven, leave Cheesecake in the oven 30 minutes longer. Remove from oven and cool in a pan on a wire rack away from drafts 30 minutes.Without releasing or removing side of the pan, run a metal spatula or a butter knife carefully along the side of the Cheesecake to loosen. Refrigerate uncovered overnight at least 9 hours but no longer than 48.Run metal spatula or butter knife carefully around the side of the Cheesecake to loosen again. Remove the side of the pan. Leave the Cheesecake on the bottom to serve... but don't forget the Shaved Chocolate or Sprinkles. I'm not trying to be bossy here but really - who doesn't love  a well-dressed cheesecake?