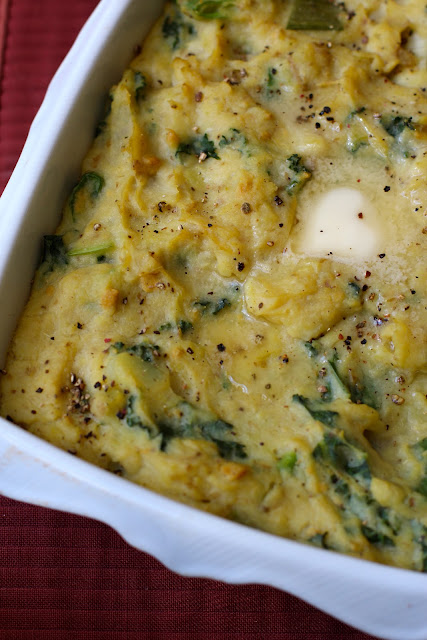 Calcannon* is not just an odd word to say, it's a dreamy Irish dish that's usually made with potatoes, scallions and kale. Once upon a time it was a common meal in Ireland and in it's heyday was pretty much their mac and cheez. And why shouldn't it be? It's easy. It's good for you and it's actually a pretty great side dish but we decided to level it up anyways.

We replaced our beloved potatoes with cauliflower. For years, the low-carb disciples have been replacing mashed potatoes with this other white vegetable and as much as so many things that crowd does makes me shudder - this I can support. Cauliflower is a great source of potassium and has a considerable amount of vitamin C. In this recipe, it's combined with leafy green kale, nutritional yeast and leeks to become a vehicle for numminess.

If you're looking for something to enjoy with your vegan corned-beef and cabbage this St.Patrick's Day - well - here it is!

So let's get our calcannon on!


In your largest stock pot or Dutch oven heat salted water to a boil. Then toss in your Cauliflower pieces. If you have a steamer, I would recommend using that instead but I've heard from many of you that you don't. Boil or steam your cauliflower till it's tender and then drain. Put your Cauliflower into a food processor and puree until smooth.

Don't rinse out your pot. Add Olive Oil and Liquid Smoke to the pot and heat over a medium heat. Once your Oil is hot, toss in your Leek, Scallions and Garlic and cook until your Leek and Scallion are tender. Then toss in your Kale and mix it into the hot oil. Then add your pureed Cauliflower, Nutritional Yeast, Sage,Thyme  and Vegan Sour Cream and mix with a large spoon until blended. Now give it a test taste.

You'll want to add salt and pepper to taste at this point. You're going to be baking your Calcannon so add just enough Salt to taste it but when you bake off some of the moisture in your Calcannon, that Salt will become more potentate.  So keep that in mind.

Move your Calcannon to an oven safe dish and put one tablespoon of Margarine on top. Bake your Calcannon for no more than 10 minutes. You just want to melt your Margarine and get a very slight crispy crust on top.

Serve with more margarine and salt and pepper so everyone can season their serving like they would mashed potatoes and don't forget the green beer.