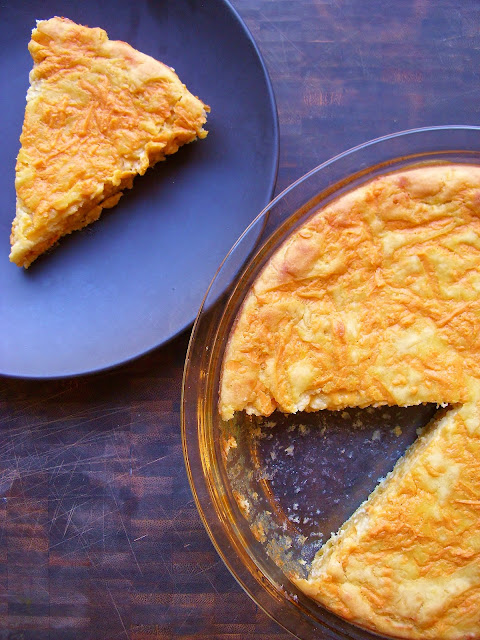 *Read the comment section for updates concerning this recipe*

Not that long ago there was this flood of Mac & Cheese recipes that hit the internet. There was impressive pizzas, ambitious deep fried nuggety things and I seem to remember one that was on a stick. I'm willing to admit that last one might have been a dream I had once. It was marvelous because it seemed like around the world there were all these amateur food scientists working away in kitchen laboratories with boiling posts of pasta and vats of faux cheese*. All striving to recreate the ultimate American classic. Muahahahaa.

Ironically Betty has a bunch of recipes from circa 1970 that did that in a remarkable way. I mean of course she did. What doesn't that lady do? Now you might remember like a year and some change ago we took a stab** at  veganizing Betty's Cheeseburger Pie. It was one of the very first recipes where we really closed our eyes and just fell into Betty's arms like some fraking co-workers on a team building retreat. This recipe is a take on that little gem that is actually pretty amazing. I'm pretty sure that for some of you loyal lurkers, public followers and vegan Betty-heads, this was the kind of recipe you were looking forward to when we decided to take on the challenge of veganizing Betty's Big Red

. So I hope you guys give this a recipe a chance. I think next time we make this I might add some Bac-os*** and broccoli florets because this recipe is really good but I think with a little extra is could be super awesomepants. I'm not sure if awesomepants are better than awesomesauce. Sometimes I just type things and make myself laugh.

Are you ready to be awesomepants? (ones you can dance in and make romance in - again sometimes I just type)

Brush your favorite glass pie baking dish with an even coating of Olive Oil. Then pour your uncooked Macaroni into the dish and smooth out into an even layer. Sprinkle the Daiya and Sheese over the top.

In a large mixing bowl, blend the remaining ingredients with a handheld mixer until smooth. Once blended, pour it over the Vegan Cheese and uncooked Macaroni. Use a fork or butter knife to gently stir your pie a little to make sure the Bisquick gets through your layer of cheese and surrounds your Macaroni. You can look through the glass dish to see if that has happened. Use a spatula to smooth the batter out on top. Sprinkle a little Daiya and Sheese over the top and put in the oven for 30 to 40 minutes or until the pie is golden brown and you can stick a bamboo skewer into the center of the pie and remove it cleanly. You'll notice the edges will brown much quicker than the center. Once the edges begin to brown, start checking your pie with a skewer.

Some pie baking dishes are deeper than others. So that's something to consider when you're baking. Deeper the dish - longer it might take.

* That might have been another dream I had once.

** What a strange and violent saying.