There has been a kind of overload of awesome happening lately.

Exhibit A: You might know Brea Grant from Heroes or maybe Friday Night Lights, but you will definitely know her from her upcoming role in Dexter. What you might not know is that she writes comic books

and reads Meet The Shannons! She also made some bewitching 24 Hour Pickles! How kick ass is that? Answer : River Tam kick ass*.

Exhibit B: I found this marvelous tumbler full of ridiculously adorable and well-educated cats by Sarah Sobole and fell madly in love. It all began when I was sent this: 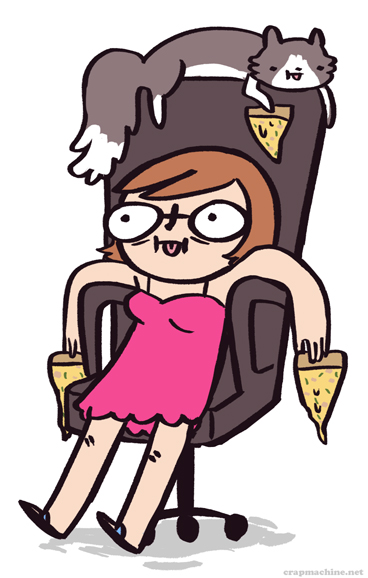 I've never really seen myself captured so completely in art before**. It's weird... it's like Sarah is spying on me right now. Or perhaps is my doppelganger.

Exhibit C: We made Tequila Fajita Vegan Chicken Wings. I know I've said this before, but if you get a chance to try out these Vegan Drumsticks from May Wah, you really need to. They're one of the best mock meat products on the market, and are great with pretty much any glaze or sauce we've ever tested them out with. They can be grilled, baked, or fried--pretty much making them a perfect replacement for those wings and drumsticks actual chickens need more than we do.

If you can't get your compassionate little hands on these wings, you can always use this Tequila Fajita baste on your favorite vegan chicken on a skewer, and then toss them in an actual fajita wrap. Whatever you do, make sure and make a batch of Salsa Verde. Honestly, it's an amazing combination of hot, tart, and savory that I can't praise enough. If it sounds like I'm gushing right now it's because I totally am.

All and all this week has ended on a high note, free of sudden and inevitable dinosaur betrayals and full of pretty dresses... Yes, I did finally get that bunny dress I've been tweeting about. Expect to see it in action soon, because I'll be wearing it this weekend when we film our first podcast!

Are you ready to be a big damn hero and make some kick ass vegan chicken wings? Grab your tequila and let's go!

In a large bowl, mix all ingredients except Vegan Chicken, 2 tablespoons of Olive Oil and Cilantro with a whisk until it makes a smooth sauce. Then mix in Cilantro with a large spoon.

Serve with a side of Fresh Salsa Verde for dipping and lots of napkins because they are juicy and delicious.

Place all ingredients in your chiquitita cast iron skillet, cover and heat on medium heat for 10 minutes. Check on your Salsa often and stir it to blend flavors. Then pour into your food processor and blend until it is a smooth liquid. Then put in an airtight container and chill in the fridge for 20 minutes.


* You guys know I save the Joss Whedon for the really cool stuff.

** I should mention this is not actually a picture drawn of me but a self portrait by Sarah Sobele.