The Betty Crocker Project : Borscht for Vegans who Don't Like Beets 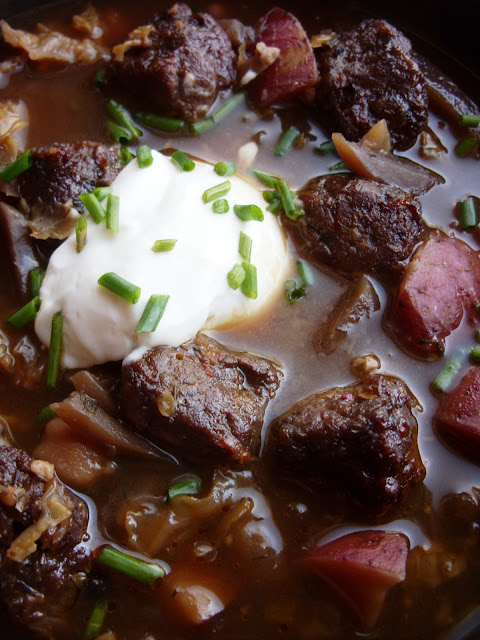 Despite what one of the most popular TV characters/villains of our generation would have you believe... not everyone loves beets. I, in fact, kinda hate them. I hate their unusual texture, their weird indescribable flavor, and how they turn your teeth pink. Whenever I think about this, I have bad flashbacks of a friend from college who used to eat them straight for the jar. It still gives me a little shiver.

So when I saw this recipe in The Big Red

, I made this face. But then I realized that most people hate beets. In fact, according to Men's Fitness, beets are one of the most hated foods. If you follow that link though, you may notice that Avocados are also listed,so I'm a bit suspicious about how accurate this list actually is.

But if you're looking for scientific proof, volunteer at any food bank or homeless shelter. People donate beets more than almost any other canned food, besides maybe yams. Also note how long those beets sit on the shelf and in cardboard boxes.

Then I looked at the recipe and realized that I could totally make something that tasted like all the good things about Borscht without making your teeth pink or being heavy on actual beets. There are still beets in there, and you can still taste them a little, but just the right amount to make you say "Whoa - I might not hate beets". In fact, speaking as a Reformed Semi-Pro Beet Hater and Grump-a-Saurus: this soup is just a truly great Fall Classic that I would eat everyday.

Spray a glass baking dish with Olive Oil Cooking Spray. Then arrange your Gardein in the dish so none are touching, and then make a layer of Red Onion over the Gardein. Put in the oven for 5-8 minutes. Remove when the Onions are tender and a golden brown.

In your favorite Dutch oven, add Bouillon, Wine, Braggs, Pepper, Potatoes, Garlic, Cabbage, Garbanzo Beans, Dill, Thyme, Onion Powder and Pickling Spices*. Cook to at a medium heat until it boils then turn heat down to a simmer. Then add Beets and the 1 Tablespoon Olive Oil . Let simmer for around an hour. To serve top with Vegan Sour Cream, Chopped Chives and Gardein (that will keep the Gardein from getting too moist).

*SO! Let's say you hate actually eating spices. You can also take the Pickling Spices and put them in a tea diffuser all BOUQUET GARNI-style - like we did during the Coq Au Vin recipe instead of mixing them in the soup. That's the refined version, but we went rustic. We tossed ours in because I thought it would look cooler and we love spicy.
Posted by Annie at 8:46 AM