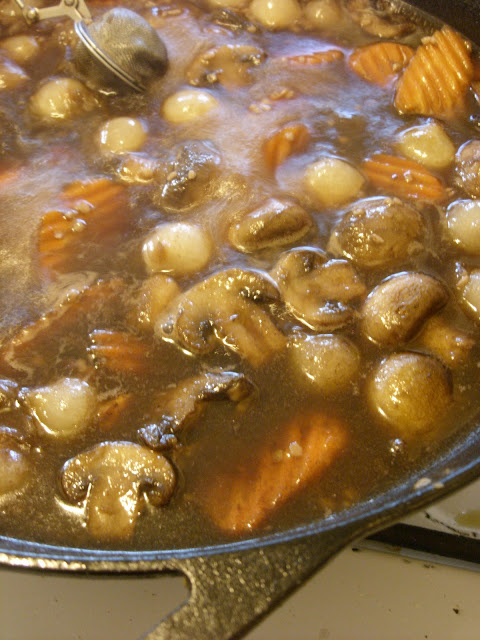 So I went with the cooking photo rather than the dinner table photo because even when you make the original Coq Au Vin correctly it looks kinda less than super.  When it all gets spilled onto a plate and garnished, you miss the carrots, the perfect mushrooms and those cute little pearl onions. . . and THE BOUQUET GARNI!

I have never made one of those before.  Rather than the traditional French way of tying the herbs with a string I followed Betty's instructions to put the herbs in a tea ball infuser. . . which wasn't as cute but worked. She also had other suggestions like putting the herbs in a small cloth bag or using cheesecloth. I have to admit this recipe was kinda one of the hardest things I have ever made. . . mostly because I have never actually eaten the meaty version and it is a dish that people have such strong feelings about.
There are all these stories that Coq Au Vin was a dish that can be traced back to ancient Gaul and Julius Caesar but many think that this might be an attempt to add a little distinction and history to an old rustic French farm dish. Anyone who has been to Paris and seen all those columns and statues of generals with laural wreath halos and paintings of women in togas knows the French really love themselves some Romans.
But that is not the only controversy surrounding Coq Au Vin. Anyone who watches Top Chef can remember Season 3's BIG Coq Au Vin debate. See "Coq" is French for "Rooster" and if you are making it with anything else you are suppose to address it as such. So out of respect for French people - who I adore (except that waiter in Paris who was super rude to us when we ordered glasses of wine rather than a bottle so we could sample a bunch of different types) and any other foodies who have found us, please enjoy our Seitan au Vin :

In a shallow dish mix, mix Flour, Salt and Pepper. Coat Fake Chicken with Flour mix.*
In a cast iron skillet, heat Olive Oil. Cook Fake Bacon until it reaches a desired crispiness then remove and place on a plate with a paper towel to soak up extra oil. SAFELY throw on dash of Liquid Smoke in the hot Olive Oil and mix it in. Add another teaspoon of Olive Oil if you lost a lot of oil in Fake Bacon. Cook the Fake Chicken in the smokey oil. Keep turning it till you get a crispy cover over the Fake Chicken and then move to the plate with the Fake Bacon. The extra Flour will mix with the Oil to make a kinda faux roux and that's a good thing so don't worry about the oil getting cloudy.
Add Onions and Mushrooms to the hot smokey oil. Stir and cook till Mushrooms are tender. Add Vegetable Broth, Red Wine, Braggs, Carrots, Onion Powder, Garlic Powder, Celery Seed, Garlic and Bouquet Garni. Bring this to a Boil. Let simmer for around a half hour or until the carrots reach a desired tenderness. You can add another Teaspoon of Olive Oil here if you want to recreate the oiliness this dish would get from the Bacon and Rooster fat.
Chop the Slice of Fake Bacon up. Right before you serve. Add the Fake Chicken and the Bacon pieces and mix. To garnish sprinkle with Fake Parmesan or Nutritional Yeast and chopped fresh Parsley. It is a stew-ish kinda dish so it won't be pretty. . . but there are more important things than looks. This dish has a good personality.
*So while we were eating this with our first Betty Crocker Project Guest Ray, the seitan started to soak up the moisture in the broth and get saltier. The next time we make this I think I will bake the seitan before coating and frying it to give it more of a "skin" against that. It didn't get soggy though just salty- so if you like salt you may just want to go with it. Dan and Ray said they thought it was still pretty good and wouldn't change it and I thought it was pretty good too. . . so I'm just throwing it out there.