The Betty Crocker Project Meets The Shannons for Lunch... 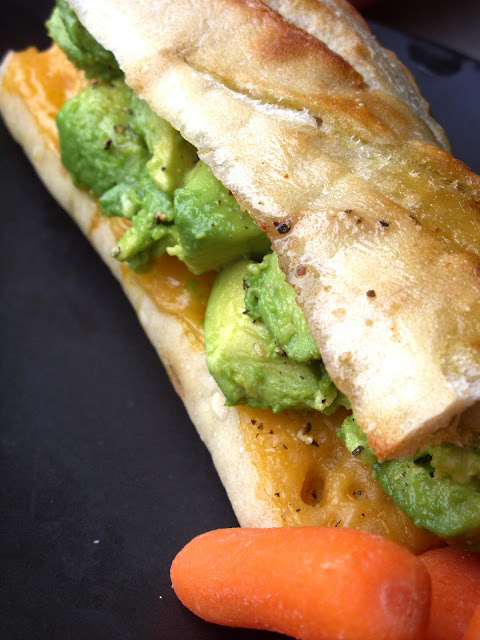 I would like to introduce you to my lunch today: Betty's Rustic Avocado Baguette Sandwich with a side of baby carrots.

I'm glad no one was around to see me eat this epic creation, though, because to honest this little guy is messy. looked a tiny bit like this eating it. I had a green avocado beard, and next thing I knew I was wearing a trucker's hat. But it was worth it!


Set your oven to Broil. Cut Baguette horizontally in half. Drizzle the Italian Dressing over the top half of the Baguette. Spread the Fake Cheese over the bottom; if you're using Tofutti Slices, you'll want to cut them in half. Place both halves on your beloved pizza stone, so that the Dressing and Fake Cheese are top-up and can melt onto the bread. Broil for 5 minutes, until the bread gets a golden crispy edge and the Fake Cheese is melted. Then, remove from oven.

In a small bowl, mash Avocados and then spread over the melted Fake Cheese. Sprinkle the desired amount of Lemon Pepper over the Avocados. Then, cut the Loaf into 4 pieces.

In case you were wondering what my better half had for lunch today... I made him a Smoked Tofurky and Veggie sandwich with some of this infamous bread, and he sent me this picture with a "thank you": 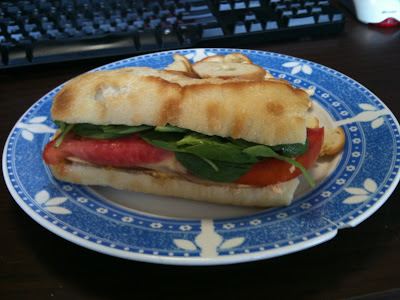 PS: I don't make lunch for Dan everyday. He makes lunch for me. He's a good one.
Posted by Annie at 8:07 AM