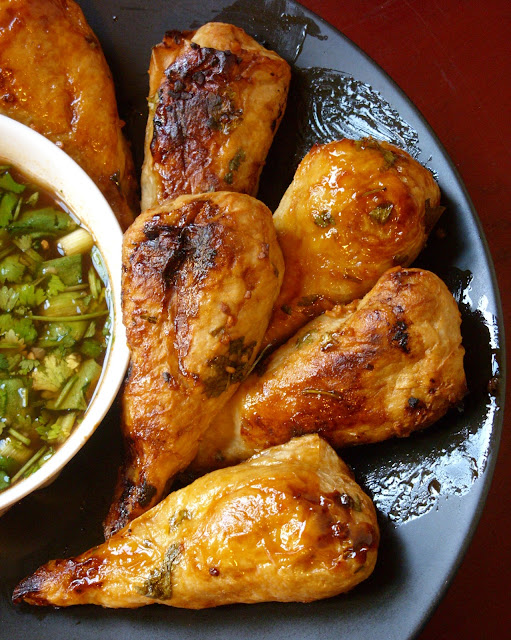 Are they messy to eat? Yeah, a little bit. Are they hard to make? Not at all. Are they super spicy? Yeah, they have a kick to them. Are they amazing? Oh yes!

Some of you might remember a few weeks ago when I shamelessly gushed over Pad Thai. I mean, if I could have left a red lipstick kiss on that blog post, I would have. It's going to be hard for me not to write another love letter to this recipe. Not just because Thai food is a favorite in The Shannon Household, but because this was a really good dinner and really added a few fireworks to regular old Tuesday. Yes, there were a lot of substitutions and changes made to veganize this one but I have to thank Betty for the inspiration. I know I'll be re-using this recipe for years, and to be fair, I have The Betty Crocker Project to thank for expanding our recipe oeuvre if you will.

But that's ultimately the point of Betty Crocker, isn't it? I mean, she wasn't a real person. She was a icon developed to market products to housewives and aspiring housewives. Because let's be honest; even in those glamorized Leave to Beaver 1950s, many women worked outside the home, still faced the same societal expectations, and were expected to come home and do the work of their "stay at home" peers. This was even more true in the late 1930s, when Betty was invented. OK, my Women's Studies major is showing a bit, but back to my point: Betty Crocker, not unlike Julia Child, brought tips, easy-to-follow recipes, and a little affordable flare to American kitchens. She made it easier for Tuesday night to be more than the same old pot roast and mashed potatoes. Betty is that big sister who slips you her famous cake chocolate cake recipe right before the potluck, or walks you through how to make Thanksgiving dinner from scratch. Yeah, she's pretend, but to me that's what makes her great... sorta like Santa Claus.

So Merry Food Christmas to us all! Here's some kick-ass vegan Thai chicken wings for your stocking!

In a large glass dish or bowl, mix All Ingredients except Vegan Chicken and Cooking Spray until well-blended. Toss in defrosted Vegan Chicken, and with a spoon, make sure the vegan Chicken is completely covered in the Sauce Mix. Marinade for 30 minutes. Depending on how shallow your dish or bowl is, you may want flip the Vegan Chicken a few times to makes sure one side doesn't get more flavor than another.

Spray a glass baking dish large enough to hold your wings with Olive Oil cooking spray. Place marinated Vegan Chicken in the dish. Try to make sure they aren't touching. Pour 1 Tablespoon of the Marinade/Sauce over each Vegan Chicken Wing. Bake uncovered for 30 minutes. Flip Vegan Chicken Wings once half way through baking.

When you serve, put the leftover Marinade/Sauce in a dish to dip in. The fresh Cilantro, Green Onions, Lime Juice and Spiciness are really spectacular and the sauce adds a but more au jus that's messy, but worth it.