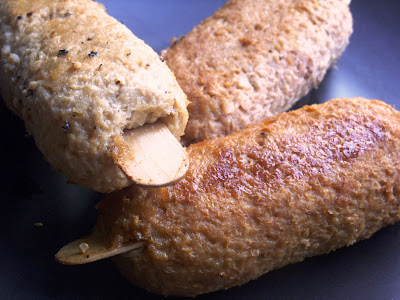 When we took on the challenge of veganizing The Betty Crocker Cookbook, we knew there would be times when we'd need get creative. We've already mastered the Vegan Poached Egg and the Stuffed Crust Pizza, but there are still some recipes looming--menacing really--in the distance. You know the type: the lurkers. Until we discovered Match Vegan Meats*, Spare Ribs was one of those recipes.

Now, our spare ribs don't look that much like real spare ribs--and we're OK with that. We prefer it really. I mean, bones. Ick.

But our little guys are prefect vehicles for BBQ sauce, and you can glaze 'em and bake 'em a little, and then toss them on the grill for some more smokiness, or even just eat them like this. Whatever. I won't boss you around. But I will tell you that if you're looking for something fun to eat on a summer night, something to bring to a potluck, or to just save yourself some dishes,nothing beats fake meat on a stick! Always a crowd-pleaser.

We made ours with 3 different types of glazes. The Spicy BBQ Glaze was our favorite. Yeah, I would have thought they'd name it something a bit more snazzy too, but the generic name doesn't make it any less remarkable. If you're going for a more traditional BBQ flavor, though, I recommend the Molasses-Mustard Glaze. If you like some heat, the Sweet & Savory Glaze is no joke. It may look weird when you see the ingredients, but it has a legit kick to it that really made it stand out.

But I guess Vegan Spare Ribs might stand out all on their own, so how you glaze them is kind of a matter of judgment. Enough lollygagging; let's make up a mess of these!

Take about a cup of Match Vegan Pork and form it onto the Stick. You want it to be more like a corn dog than a ball, and you'll want to really squeeze it on there. Make sure you have no cracks and that the Match Pork is one solid mass on the stick.

Place your Ribs on a large plate. Brush your Glaze (recipes below) over your Ribs. Get a nice even layer all over the Ribs; get both sides and the ends. Now place your glazed Ribs on a cookie sheet covered in foil.

Put in the oven and bake for 15-20 minutes. Half way through, turn your Ribs to bake the other side up and add another layer of glaze. That second layer can be thicker. If you start to see some glaze burning on the foil, don't worry; it'll do that. Just move the Ribs to another spot on the sheet.

When you pull them out, let them cool for a few minutes, and then serve them with a bunch of your favorite BBQ sauce.

Glaze #1: Spicy BBQ Glaze (This was our favorite. It's garlicky and lemon-pepper-y; just awesome!)


In a saucepan, heat all the ingredients over a medium heat, stirring frequently until the Margarine melts. Then, brush it on the Ribs.


In a bowl, mix the above ingredients until smooth, and then brush onto the Ribs.


In a small dutch oven, heat all the ingredients over a medium heat. Stir occasionally, until the jelly melts. Then, brush it on the Ribs.

*Special thanks goes out to Freddie Holland over at Match Vegan Meats for sending us tips on the best way to use and prepare Match. You encouraged us to try this again and really helped us make this a success. You're a hero!
Posted by Annie at 5:09 AM