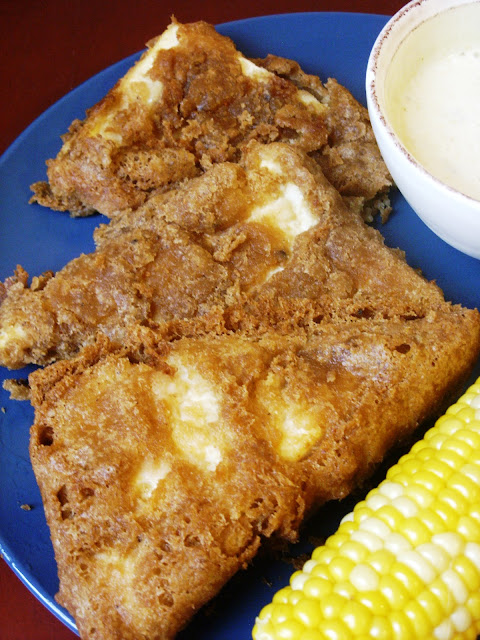 Sometimes you just get what you need.

The other morning I woke up and thought: "I'd love to watch a detective story that has something to do with submarines while I drink my coffee today."

And you know what? I stumbled across a random episode of a CSI-type of show with Mark Harmon as a Navy FBI/police-type-person (?) that... guess what? Solved The Mystery of the Sailor Swap on a submarine!

This morning I woke up and thought: "I think I need more Richard Dreyfuss movies in my life."

Last night, I needed to come up with a new plan for dinner because my Match Vegan Chicken wasn't defrosted... and there she was. A little, forgotten package of extra-firm tofu. She waved and said "Remember me? You were going to make me into vegan fish sticks!"

I smiled and thought, "I can do better than, that my little friend*."


If you're using Tofu, cut your block of Tofu into 6 triangle slices with a serrated knife to create a "fish" texture to the sides, similar to what we did with the Tofu Tuna Steaks.

Mix your chilled Miso Soup and Worcester Sauce in a casserole dish that's large enough to hold the 'Fish', but not so large you won't be able to cover the 'Fish' with the Miso Marinade. Put your Tofu Fish in the Marinade and let then hang out for around 10 -15 minutes. Turn the a few times to make sure they get an even flavor.

If you're not using Tofu, let's just get right to the Beer Batter, because you can just use your fake fish right out of the package (defrosted, of course). Whatever you're using, from here on out the pieces of Fake Fish or Tofu will be called the "Vegan Fillet".

Heat your Olive Oil in a 4 quart Dutch Oven on a medium heat.

In a shallow dish, put that first portion of 3-4 Tablespoons of Bisquick Mix.

In a medium sized bowl, mix the remaining ingredients (except the Tartar sauce) with a hand mixer until smooth. If it's too pasty, you can add a dash of Beer, but not more than an additional Tablespoon.

OK. Once your see your Oil start to boil a little, it's time to do this.

Now this can lead to a big mess, but here's a trick to keep your bowls from getting contaminated. Pick one hand to be powder, and one to be batter. Then, using your powder hand, take one of the Vegan Fillets and put it into the Bisquick Powder, and only using that hand, cover the Vegan Fillet. You want to tap it a bit to get a good cover, and make sure you get the sides.

Using your slotted spoon, remove your Vegan Fillet. Be careful to not break your crusty, golden-delicious batter when you're getting it. Place on a plate with some paper towels to soak up extra oil.

Between Vegan Fillets, take your slotted spoon and remove any bits of fried batter that have fallen off, so they don't stick to the next Vegan Fillet.

Just repeat this process for each Vegan Fillet and enjoy the rest of your beer until you're all done.

Serve it up with some of our Vegan Tartar Sauce, and maybe some corn on the cob or some fries. Or maybe some more beer. Just enjoy.

*The picture doesn't really do this dish justice. If you grew up eating Fish and Chips, this is a great vegan alternative!
Posted by Annie at 6:25 AM