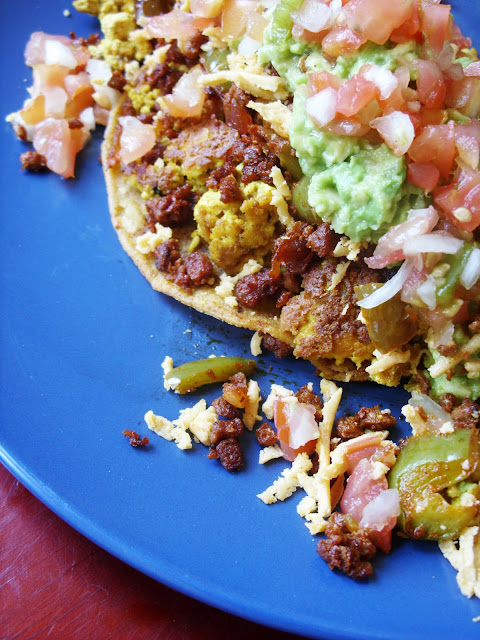 There comes a point in the life of every relationship when the topic of babies comes up. OK, maybe not every relationship, but these days babies are all the rage around here. Plus, that opening sentence sounded better than: "Sometimes there are a lot of babies."

People are having babies, asking when we're having a baby, there are baby showers, baby food challenges on Top Chef, and I find myself craving baby corn in my salads pretty much daily. This summer will be remembered for this adorable, powder-scented, PJs-with-feet, out-of-control baby wave.

One of my oldest and dearest, Libbe, had a beautiful little girl with the most shockingly wonderful head of hair ever. One of the sassiest people on the planet and my old friend, Amanda, has a darling little girl who dresses better than I do. Fellow vegan foodie Angie's ravishing daughter has been owning my Facebook stalker feed lately. These girls are like the baby versions of Cindy Crawford, Christy Turlington and Claudia Schiffer in the 90s... They're everywhere, but I don't mind, because they're so ridiculously good looking. *

Now, some of you already know my dearest buddy Sarah, perhaps as the cover girl for our Vegan Foods = Joy Facebook page. It wasn't that long ago that Sarah and I were planning our weddings together. I was reading and weeping at her wedding, and she was dancing her ass off at ours in a green dress that I actually wish I had bought for myself. This weekend, Sarah and her husband Shaun (who's also pretty boss; and yeah, I'm bringing that back) had a perfect little girl with big blue eyes named Spencer Hanalei. I'm already dreaming up ways to spoil her, and trying to veganize some of those baby food recipes from Top Chef. I spent most of the weekend checking my phone for new photos of Spencer and updates from Shaun. I have a feeling Spencer is going to be the baby Gisele Bündchen. I'm pretty sure she'll be convincing me to buy a Mac any day now.

On Sunday, Dan and I had brunch with some friends and their entertaining and freaking lovable son Isaiah. I guess he's not really a baby anymore. He walks, feeds peanut butter to the dogs and says "oh man!". But I don't think I have ever had so much fun watching a person smaller than me eat and stack things. Sarah (different Sarah) baked these Strawberry Coconut Scones that tasted great, and were like the supermodel of baked goods. If these scones were a movie star they'd be Audrey Hepburn: all sweet and charming. We'll make them for you guys some time. We brought over our version of Betty's Huevos Rancheros.

When I was first planning this out in my head, I wanted to make a vegan fried egg using a version of The Vegan Poached Egg. But the food needed to make the trip to the Kings' house, and I was distracted with baby updates. So Tofu Scramble it is! This recipe was a big hit, though, and an easy yet impressive spread for Sunday Brunch. I know we'll be making it again with a vegan fried egg... but until then, enjoy this version, and share with friends. This recipe makes enough to feed 4 to 4 1/2 people.


In your amada cast iron skillet, heat 2 Tablespoon of Olive Oil and a Dash of Liquid Smoke on a medium heat. Toss the Soyrizo, Onions and Green Peppers in the oil. You're going to want to flip/toss this a few times, but mostly you need to be patient, and let the Soyrizo mix brown until it gets crispy edges and the Vegetables are tender. Then, remove from the frying pan and set aside in a large bowl.

In the same skillet, add another Tablespoon of Olive Oil and another dash of Liquid Smoke. Then, one at a time, fry the Corn Tortillas. You want to flip them so they get crispy on both sides. Fry them until they're golden and crispy on both sides, and stiff like a chip. To make sure you don't have to add more Oil and Liquid Smoke, be sure to drain out as much Oil as you can when you remove them from the skillet. Place the fired Tortillas on a plate with a paper towel to soak up excess Oil.

In a bowl, crumble the Tofu with a fork. Don't mash; you want medium sized chunks. Then, with a wooden spoon, stir in Nutritional Yeast, Garlic Powder, Cumin, Paprika, Lemon Pepper and Turmeric.

Once you're done with your Tortillas, add another Tablespoon of Olive Oil, another Dash of Liquid Smoke, and the Tofu Mix. Like you did with the Soyrizo, let it fry a bit before flipping/tossing it. You want it to get those crispy edges, so keep an eye on it and flip it a few times, but let it cook.

This is a good time to make your Guacamole, per the recipe near the bottom of this post.

Once your Tofu Scramble is the desired texture and crispiness, turn off the stove top. Then, put together your Huevos Rancheros like so: Crispy Tortilla, Tofu Scramble, Soyrizo, sprinkle some Daiya Cheddar, Guacamole and your favorite Salsa.

*Supermodels wear fur and that sucks, but these babies don't, and I know they'll use their stunning good looks and superior intelligence (which they will have some day) to make the world a better place for animals--not for evil or eating disorders.
Posted by Annie at 8:31 AM