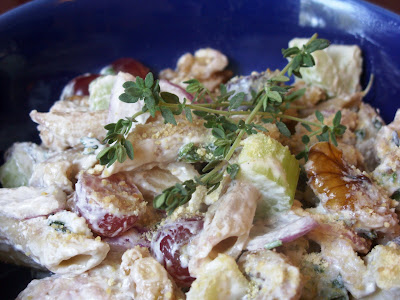 This is a really nice recipe. There's no scorching spiciness, no rich and creamy fake cheese, no hot kitchen afterwords - nothing to put a dent in a perfect summer afternoon. This recipe just makes you feel good about spending your Saturday watching The World Cup with loved ones and gets along with everyone: Triscuits, Iced Tea, whatever.

Exhibit A: This weekend, Dan found a $50 bill in our parking lot, and spent almost an hour trying to think of ways to return it to the unfortunate butterfingers who dropped it. How nice is that? He's good people.

Exhibit B: My favorite part of the Word Cup is watching the players and fans from all over the world being so happy to be there. After each game, they're hugging and shaking hands and at least appearing to be sincerely "nice" to each other. We watched the England vs. USA game in a bar full of drunk British Naval officers in town on their way to the Gulf of Mexico - we were outnumbered 5 to one. The whole game, we were out-cheered, heckled and out-sung (they had nice little soccer ditties that we could only respond to with chants of "1776" and the chorus from "Born In The USA"). After the game, we bought each other shots of American Jack Daniels and Scottish Johnnie Walker (closest they had to a good English drink). They shook our hands and said "good game". They called us mates and there were hugs all around. Such a far cry from the fist fights outside the Yankee/Sox games.

Exhibit C: I'm vegan. What could be nicer than living a lifestyle that is nice to your body, the environment, and of course, animals.

Nice is just not appreciated enough. Nice is what we call the people we are too young and dumb to realize we should be dating. Nice is what dudes say when something isn't quite "sweet". But I'll be honest - I love nice. Nice, you are my very favorite, and so far this is my very favorite of the Betty Chicken Salads.

Put your cooked Penne and Fake Chicken in separate bowls and into the fridge to chill. I waited 2 hours, but I really only needed to make sure they were cool to the touch.

In a much smaller bowl, mix Olive Oil and Fresh Thyme. You're going to want to let that sit for about 15 minutes. You may want to return your Pasta Mix bowl to the fridge while you let your Oil get kinda flavored. You want to keep them cold to the touch.

Once you can get a faint herbal scent from the Oil Mix, pour it over the Pasta Mix and toss.

In a medium bowl, mix Veganaise, Agave Nectar, Dijon Mustard, Braggs, Nutritional Yeast, Celery Seed, and Black Pepper with a hand mixer. Once it's completely mixed, pour it over the Pasta Mix and toss. Cover and refrigerate for about an hour. I waited 2, but I was watching the second season of TrueBlood, and was distracted. Right before you serve it, mix in the Walnuts, and sprinkle each bowl with some Vegan Parmesan.