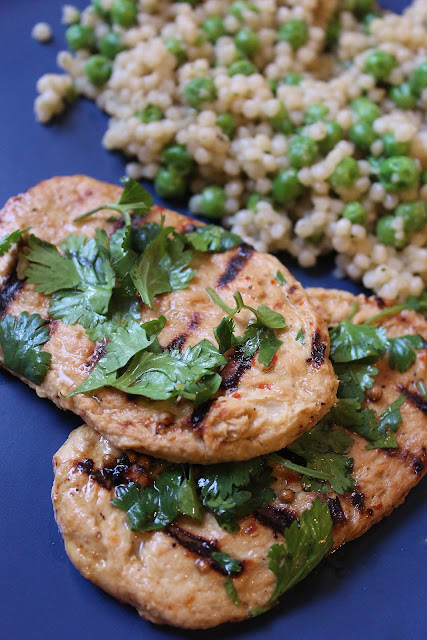 OK - So we had a huge bunch of cilantro and so we got a little crazy with it this week. I think there are worse crimes. If you're one of those who don't love the taste of this leafy green -- you can always skip that part of this recipe.

It's another fast and easy recipe that will get you in and out of the kitchen with little suffering. We had ours with some lemon pepper Israeli couscous from Whole Foods made with peas and had dinner in about 30 minutes. We defrosted our Gardein chick'n scaloppini breasts earlier so that definitely cut back on how long this took.

I know a lot of us might be feeling a little food prepping, dish washing and hostessing burn-out after yesterday's festivities so I thought this might help give you an out for dinner for the rest of the week. I mean making sure that the ice chest stays full while the BBQ coals don't go out and figuring out how to keep bugs away from the pie and Soy Delicious is fun at the time but after the fireworks... it's freaking exhausting.

We celebrated this year with an epic game of Civ5 and season 4 of Sons of Anarchy* because Dan caught some kind of death flu on his work trip to Seattle. Oh and we're total nerds. So there was no read, white and blue flag cakes or BBQ burgers for us this year. But that's what grill pans and liquid smoke are for right?

Coat your magical grill pan or cast iron skillet with a light coating of Olive Oil Cooking Spray and heat over a medium heat.

In a shallow bowl, whisk together Lime Peel, Lime Juice. Agave Nectar, Liquid Smoke, Braggs, Jalapeno, Garlic, Cumin and Coriander Seeds. Take your defrosted Vegan Chicken and coat them with the Lime-Chili blend and set aside on a plate.

Flip your Vegan Chicken and then gently brush them with left over Lime-Chili blend. Let simmer until the edges are a light crispy brown.

Mix your Cilantro into the Lime-Chili blend.

Before you serve, toss your Vegan Chicken in the Cilantro-Lime-Chili blend.


* And yes -- we spent most of yesterday in utter shock at the chaos (or ya know anarchy) these bad-ass bikers have found themselves in. INSANITY.