I know we're behind on posting this. We left the country at the end of January for a long overdue escape and found ourselves in a few situations where the internet access could have been better. It's probably a good thing. We aren't very good at that whole "unplugging" thing. So while I do feel pretty bad for not being able to post this sooner, part of me knows that having more time to enjoy Rome, Athens and Istanbul was a good thing - in the big picture sense. But more about that later.

Today we're here to talk about St. Valentine's Day! Tonight, you might find The Shannons at Soy and Sake in Manhattan or maybe we'll camp out at home with a bottle of wine and some Doctor Who... maybe both. Here's what some of our favorite vegans are doing for St.Valentine's Day with their significant squeezes: 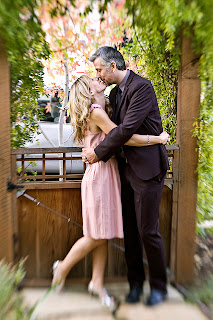 I would bet even the newest vegan knows Colleen Patrick Goudreau. Her numerous books and 30-Day Vegan Challenge have made her a reliable resource for vegans and not-yet-vegans for years! What you might not know is that she is a pretty romantic lady. Here's a little glimpse into  her plans and her dreamy marriage:

To be honest, we're probably more romantic throughout the year than we are on Valentine's Day. We're sappy dorks and do lots of lovey dovey things on a regular basis, including doing "planned surprises" for one another. We alternate each month - one month he says "I have a surprise planned on X date, so don't make plans," and I'll do the same the next month. HOWEVER, on Valentine's Day proper, David and I are treating ourselves to the Prix Fixe romantic dinner at Millennium Restaurant in San Francisco along with another couple, our good friends John and Randy. We recently renewed our vows for our 10-year wedding anniversary, and John and Randy led the ceremony. Friends and family came to our home to celebrate with us, and Chef Barry from Local Love catered an amazing (vegan of course) dinner. The weekend before Valentine's Day, we're going up to Farm Sanctuary (the CA shelter, which is just 2 hours from our home) to visit a newly arrived baby goat who has been named after my dear friend, Michael Scriber, who died tragically and unexpectedly in July of last year. Scribbles (a nickname given to Michael) is adorably adorable, and we can't wait to spend the day with him and the other rescued critters. Can't think of a more love-filled way to celebrate Valentine's Day! 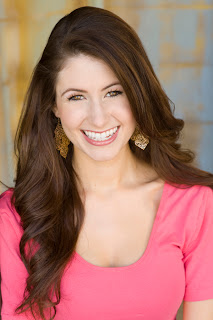 Most people know Chole Coscarelli from her historical win for vegan baking on The Food Nework's Cupcake Wars in 2010 but what they might not know is that she is a cruelty-free pro at more than just pastry and she has a book coming out in March that we're looking forward to checking out! This year, she has two new loves in her life, her brand new adopted chihuahua puppies! So she will probably stay home on Valentines day with them and cook something delicious. Most likely Fettuccinne Alfredo for the humans and Peanut Butter Dog Cookies for the pups (both recipes from her upcoming cookbook Chloe's Kitchen)! She feels and we agree "Home-cooked food is the best way to celebrate love." 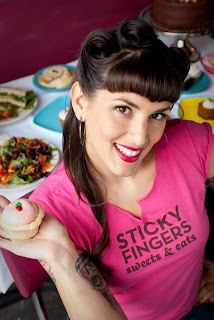 Of course, this year I was thrilled beyond belief to see Doron Petersan from Sticky Fingers Bakery not only on The Food Network's 2011 Cupcake Wars defending the title for vegan bakers everywhere but kicking some serious culinary tuckus and taking the crown! When I lived in DC, I was a loyal fan of her exceptional bakery and was thrilled to she her get the recognition she deserved. As if things couldn't get more awesome for this compassionate cooking powerhouse - Doron's book Sticky Fingers Sweets comes out this week! So tonight she's going to be taking it easy after some pretty busy months following her win. "It will be an at-home love fest this year.  No better excuse to make our favorite dish; fettuccine pasta, porcini mushrooms, garlic, rapini, and a touch of  truffle oil.  And cupcakes, of course!" 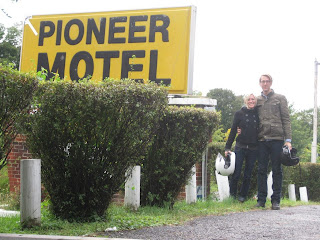 People for the Ethical Treatment of Animals, Senior Campaigner Ashley Byrne and Green is The New Red's Will Potter live in different cities (DC/NYC), so they had to celebrate Valentine’s day a couple of days early with Will visiting NYC. Their plan was to start the day with donuts and coffee at Dun-Well Donuts in Brooklyn, and end it with sundaes at Lula’s Sweet Apothecary.  And since Ashley's birthday was on February 11th - they actually had an excuse to visit Lula's a few times. If last year is any indication of what she can expect, they'll also be enjoying a birthday cake from Headless Horseman bakery (featuring her handsome dog Mongo), chocolate from Sjaak’s from Will, and an amazing vegan birthday dinner at John’s on 12th. All this a side of sleeping in with food and sugar comas by the time Valentine’s day actually rolls around!* 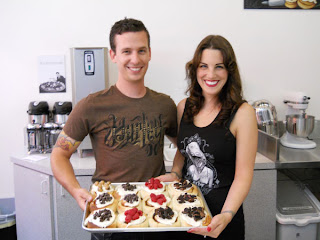 Of course, no Vegans on Valentine's Day post would be complete without mentioning Florian and Shannon Radke, the sweethearts behind Cinnaholic Bakery in Berkeley, CA. This duo is pretty much the definition of romance and cruelty-free sweets! But here's where I suck. See at the beginning of the month - They had this extremely cool project they were working on with the incredibly cool Beagle Freedom Project in Los Angeles. They were donating $5 for every Valentine's Day order that came in before February 9th. But we were in Europe then and this post didn't go up in time. So! Please consider donating to help those beagles anyways and/or ordering your sweetheart a dozen spicy and sweet rolls as a "just because I love you" treat. Both are rewarding in their own way...

Happy Valentine's Day everybody! See you tomorrow with more about our travels, a Betty Crocker update, upcoming Vegfests, new vegan products and yet another belated Good News Monday! XO