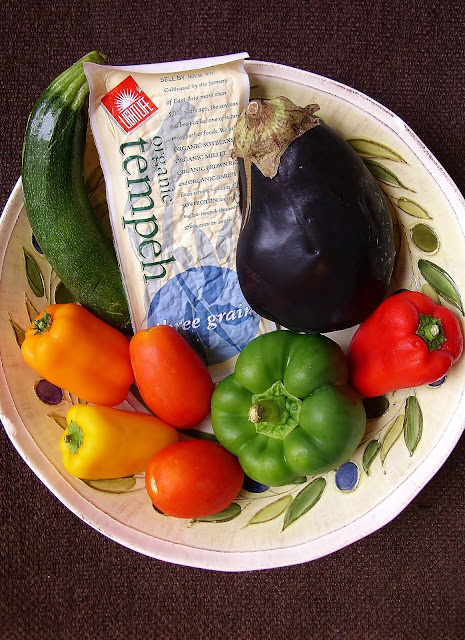 Back when I was a little vegan, one of the very first dishes I ever made was Ratatouille. Now if you're not familiar with this traditional French Provençal dish that is usually already vegan -- well that's a shame. See this dish sounds fancy but it's actually very easy and great way to get not-yet-vegans to enjoy a meat-free dinner. Don't believe me that the French could have a dish without obscene amounts of butter and cream in it? Check out Julia Child's recipe.

But after years and years of roasted veggie platters being the only option at weddings and restaurants with table cloths -- vegans can find it hard to really appreciate even the best Ratatouille. That's why we were originally less than super excited when it came time to tackle Betty's Ratatouille Heroes. I felt I was obligated -- no -- it was my duty -- to make something special with this recipe. The world didn't need another vegan roasted veggie sandwich and we need to complete our mission of making our way through Betty's Big Red. I also couldn't help but notice that the building blocks of Ratatouille have so much potential for something more.

We really hope you'll give this sandwich a chance... it might not be pretty but sometimes a sandwich comes into your life at just the right time and is full of all kinds of good things that might make you feel a little better about all those cookies you want to eat later.

This could be that sandwich. Don't worry - cookies are coming up next.

In a very large bowl, use a whisk to blend Garlic, Onion, Wine, Braggs, Thyme, Black Pepper and Olive Oil. Then crumble Tempeh, Eggplant, Peppers and Zucchini into the marinade. Cover with foil and let sit for 30 minutes.

Open up your Baguettes lengthwise put don't completely slice them in half. Cut them into 2 or 3 pieces with vertical cuts. Gently pull them open until the lay flat and then sprinkle an even layer of Daiya across the top and then bakes them for 20 minutes or until the Daiya melts.

Now toss your Tempeh and Vegetables with the Tomatoes. Use a slotted spoon to fill your sandwiches and then put them in the oven to bake for 10 minutes or until your veggies are tender.

You're going to want to fill and bake each sandwich right before you serve it - so get a headcount for who's ready to eat before you build your sandwiches. Don't worry if you have some Baguette and Marinated Tempeh and Vegetables left over. As long as you make your sandwiches in the next 2-3 hours, you're good.