Some of you have been wondering where the frak we've been, and it's justified. I mean, seriously, it's been a week and we've been completely and unforgivably MIA. It really is a fair question to ask of bloggers who cook and post every day but who, without warning, disappear like magic. It's kind of nice to know that what you put out into the world would be missed.

Well, nothing scandalous happened. We weren't abducted by aliens or trapped under something heavy. We just went to a wedding. A charming and sublime DIY wedding at a breathtaking ranch in San Luis Obispo, CA. A wedding that I will gush about in another post, because last week I posted this photo of our Taco Soup in progress and there were so many messages and emails... well, I feel like you'd rather welcome September with a yummy soup recipe you can make in your slow cooker so you don't have to worry about heating up your home while fall is still more of an idea than an actual weather situation. I mean, I'd rather be eating this soup right now than pretty much doing anything else. So I get it.

If you take a look at Betty's Taco Soup, you'll see we took a lot of liberties... and since we made ours in the slow cooker it only seemed right to throw the 'Siesta' in there - sleepy little soup that it is*. If you're following along in your own copy of Betty's Big Red, you'll notice a few 'Feistas' thrown about from time to time on the Mexican-themed recipes. Which I actually kinda like. Those 'Feistas' are just the prefect level of campy. They remind me of something Mad Men's Betty Draper would serve to her kids during a break in her chain smoking. I'm not sure why that appeals to me, but in a weird way it totally does.

Taco Soup might not sound that good at first, but much like its friend Pizza Soup, it's surprisingly delicious and awesome. You might have to look over the ingredients to be won over. Here's just a hint of how good this soup is - if you slice your onions thin enough, they'll melt in the broth, making an onion soup flavor and texture that I actually described as "gorgeous" like a tween with a crush. Yeah - that really happened.

So - Here's your rain check for an 'update' blog post about LA, Fashion Week in NYC, and a bunch of other random thoughts, rants and obsessions. Let's get this Soup Party started. 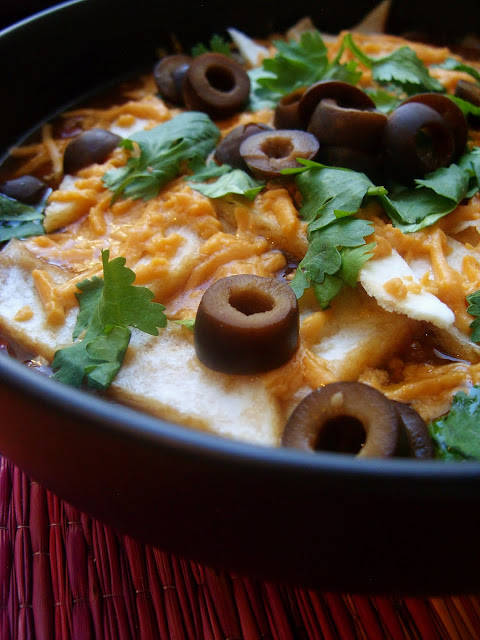 Siesta Taco Soup (we didn't add some of the traditional taco toppings this time like sour cream and avocados but maybe you should... I would skip lettuce though)

Toss all ingredients except Tortillas, Daiya, Olives, Cilantro, Salt and Pepper into your faithful little slow cooker and mix. Fire up your slow cooker to high and cook for 2 hours. Then taste test it and add any Salt and/or Pepper - maybe some Hot Sauce - till you like the flavor. Then cover it up and cook for another hour.

If you are making your own Tortilla garnish : Heat oven to 400. Cut your Tortillas into thin strips and place on your handy pizza stone. Bake for 5 minutes or until the edges are crispy. I baked mine for about 3 minutes but I wish I had done it longer so they would have looked more like these. Keep your oven going for the final step.

You're going to know your soup is ready when you taste test it and your heart does a little two step and your Onions have melted. Fill oven safe bowls 3/4 of the way full of your new favorite soup and then sprinkle some baked Tortilla slices and Daiya Cheddar over the top and bake until the Daiya gets all melty. It should take about 1 to 2 minutes. Then remove from the oven using mitts - your bowl is going to be hot. Let your bowls cool for about 15 minutes or until you can handle them without burning yourself. Then sprinkle some Cilantro and Olives over the top... or really whatever your favorite taco topping is... and serve warm with a little smile.