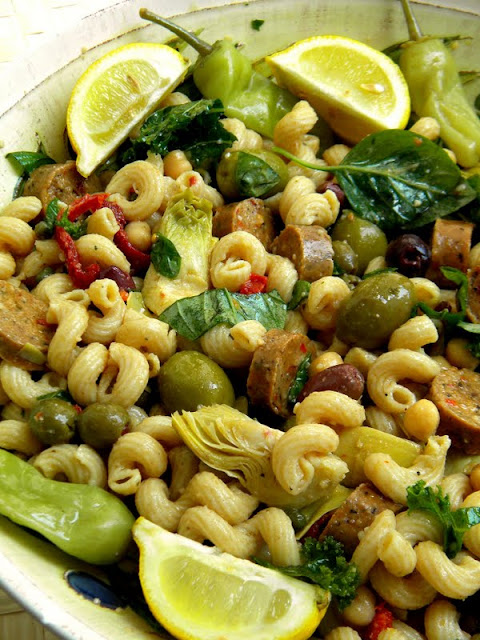 So I made a huge batch of this for our friend Jack's BBQ, but I fell asleep and missed all the fun! It was mixed luck really, because that meant we didn't have to share any of this amazing salad. But this is not where I want to sing my sad songs or brag about my awesome lunch. Instead, let's talk about something random and kinda awesome.

As many of you who follow me on ye ol' social networking pages are painfully aware, I have recently fallen in love with Doctor Who. Don't worry, I won't bore you with nerd rants about Donna* and which Doctor is dreamiest... but instead I'm going to tell you about something else I think is cool.

Doctor Who has a spin off series called Torchwood. I would describe it as the BBC version of the SyFy TV show Sanctuary, but that's also not what I'm going to talk about today. I'm here to talk heroes. The dashing hero of Torchwood is a character named Capt. Jack Harkness and he is openly bisexual. He's probably the biggest flirt in any time or space, but he also talks fondly about past boyfriends, kisses men, and has a complicated relationship with one of his male teammates. In the sci-fi universe there have historically always been issues with a lack of ethnic diversity and women with more realistic body types, but let's be honest here.. there is almost never a hero who is not heterosexual**. Which is kinda strange, considering how many epic love stories are part of the sci-fi genre. So let's be honest: we are way overdo for Capt. Jack Harkness***.

Better late than never I guess. Which brings us back to this salad. I'm posting this too late to bring to a BBQ or picnic last weekend, but the great thing about summer is there's always another get-together coming up. Or you can always make this and keep it all to yourself. Either way... YOU WIN! 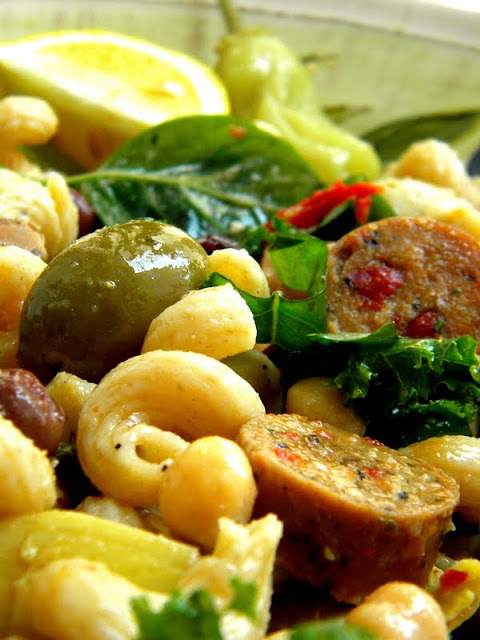 Antipasto Pasta Salad (warning: this is going to make a lot)

Squeeze Lemon wedges and sprinkle the Daiya over the top before you serve and toss in a few Pepperoncinis. I would suggest also investing in a case of San Pelligrinos****... also good with lemon wedges.

* If you're watching Doctor Who: don't give up on Donna. She has become one of my very favorite sci-fi characters of all time.
** No, I haven't forgotten about Willow and Tara from Buffy.
*** John Barrowman (the actor who plays Captain Jack) is also a real-life activist for the UK group Stonewall, a LGBT advocacy group. Which is also cool.
**** My very favorite favorite thing.
Posted by Annie at 4:47 AM