Adventures in Brooklyn - Food & Friends during the Search for the Perfect Apartment! Episode II

In Barcelona, one might expect to see the somewhat bizarre spires of Gaudi's unfinished cathedral Temple La Sagrada Familia reaching into the heavens. In Paris, there is nothing quite like the rush you get when you spot the Eiffel Tower for the first time. In London, you can't miss the world's largest Ferris wheel known as The Eye. But in Brooklyn, there are historic rusted water towers and industrial warehouses revamped in blue glass and colorful graffiti. I recently spent a week walking through Brooklyn looking for a future home for the Shannon brood.

To see photos from my journey and some cute cats click here. I know yesterday I promised to tell you all about my NYC abduction story but I haven't figured out yet how to make it funny or how it even happened. I will tell you this. I was mistaken for a Hasidic Jew twice last week. Which is cool because Hasidic Jewish women can be adorable with their cute hats and knee-length skirts but I admit it is having me rethink my new haircut a little. Also, and more importantly, make sure when you get into a strange car in Brooklyn that you think is part of some legitimate car service... that it is and not some kind of Jewish intervention program. I might be able to talk about it more later but for now - let's talk food.


I would like to introduce you to Jack Shepherd. Now you might remember him from such roles as Jack Shepherd, The Ex-Peta Files Blogger or maybe from his role as Ceremony DJ at The Danannie Wedding... but these days he is more wildly known as The Ex-President and Buzzfeed contributor/manager... and mad Dr.Who enthusiast*. We know him as our friend. (Insert AW! here)

Last Saturday, I took a break from my journey through apartment hell** to have brunch/lunch with Jack and our new friend Eric at the infamous vegan hot spot Foodswings in the notoriously hip Williamsburg. Never been? Click here to get a peek at the menu. Amazing eh? Just amazing. 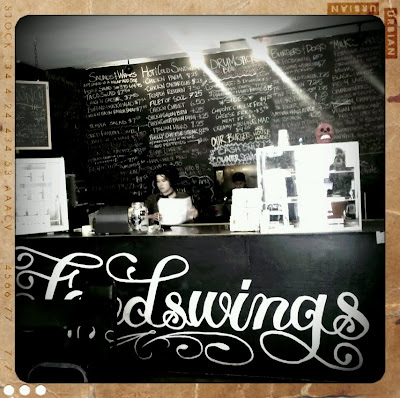 I took a few photos of our meal with my phone to share. Please excuse the poor quality of these pictures. I just didn't want you guys to miss out.


The vegan chick'n wings at Foodswings are kinda an institution. A cruelty-free masterpiece that is talked about by vegans around the world in chat rooms, emails, Facebook posts and various other rumor mills as if it was a unicorn sighting. They're so praised that it can be hard to not get unrealistic expectations but I think even if you come with those - you can still fall in love with this combo meal. Did I mention that there is a variety of sauces that you can choose from to dip your vegan wings in and their vegan ranch is heaven? Because there are and it is.

Then of course there are the new unicorns... The vegan mozzarella sticks and a new brunch menu that includes doughnuts. I'm really not very good at making new friends but it was love at first sight for me that laid a strong foundation for something more meaningful and long term. Yes - a nice meal was had by all.

Later I would meet an extremely confident man named Leon, find our home-to-be and this would happened :

During a polite conversation about living in Brooklyn. I mentioned that I may have spent some time in the Italian-American haven known as Bensonhurst. To which Leon repsonded by grabbing his balls and saying : "Choo dona look too much likea Bensonhurst." then gestured to my breasts and said "I mean choo have alla da right materials but choo dress it up likea Soho."

Am I blushing? Because I've decided to take that as the nicest thing an Italian-American man from Brooklyn has ever said to me.

In fact it was so lovely... I can't help but end today's post with a moment of Zen and a suggestion that you take the train to Brooklyn to eat Foodswings whenever possible and this concludes the first installment of my journey home.


*You want to watch that. Just watch it. Do it now. Stop reading this and watch that.

**Here's a funny thing - Do a Google image search "Apartment from Hell" and all the photos are from NYC. It made me laugh out load. More proof - I didn't come back from this trip the same person.
Posted by Annie at 8:43 AM