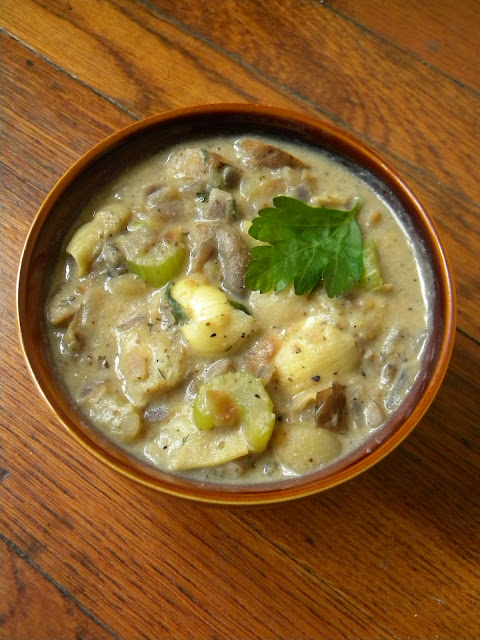 I recently discovered that my relationship with our cat Percy has developed to a point where he loves and trusts me enough to let me play air guitar on his tummy Bill & Ted style. I've been calling it Cat Guitar and it's awesome. You know what else is awesome? Vegan Clam Chowder!
We reused the classic vegan trick of using oyster mushrooms for clams - like we did when we veganized Betty's Linguine with Clams  in White Sauce & Rosemary Garlic Bread. But even though the "clams" are wonderful - the real star of this recipe is the artichokes and potatoes. The slight "fishy" flavor is really nice and reminds me of what I remember when I think of this wintery favorite. I must stress - that you will want some crackers or bread to get every last drop of this chowder. Yes - This is a clean your bowl situation.
Really - I could eat this chowder and play Cat Guitar all day... not at the same time. That seems dangerous.
If you don't have a cat to to strum - I recommend watching the long lost Galaxy Quest mockumentary "GalaxyQuest: 20th Anniversary The Journey Continues"... because it's also awesome!
Let's make some Chowda! 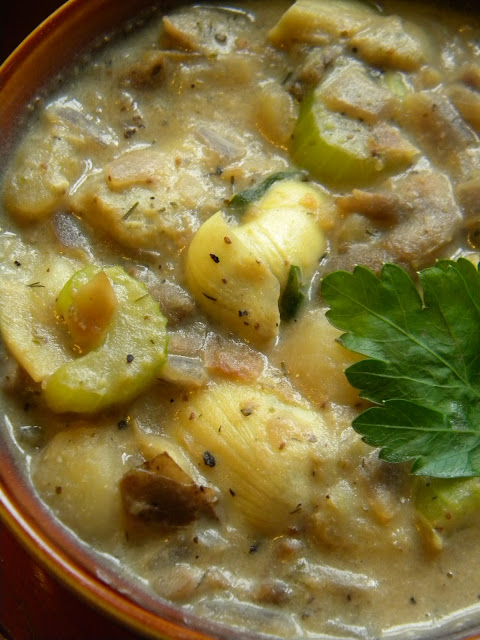 
In a large soup pot or Dutch oven, heat Olive Oil and Liquid Smoke over a medium heat. Toss in Red Onions and Oyster Mushrooms once the heat gets warm. Stir occasionally.

Once the Onions are tender, toss the White Wine, Thyme, Celery and Baked Potatoes into the pot and gently mix. Let simmer for 2-3 minutes. You want the Potatoes to start to break down a little. Then stir in Broth, Onion Powder, Dill, Celery Seed, Black Pepper and Vegan Worcestershire Sauce with a wooden spoon. Once the Chowder begins to boil, stir in Artichoke Hearts, Sea Kelp, Fresh Parsley, Soymilk and Braggs.

Let simmer another 5-7 minutes. Once the Soymilk thickens, remove from heat and enjoy with a good book, cup of tea and some crackers!