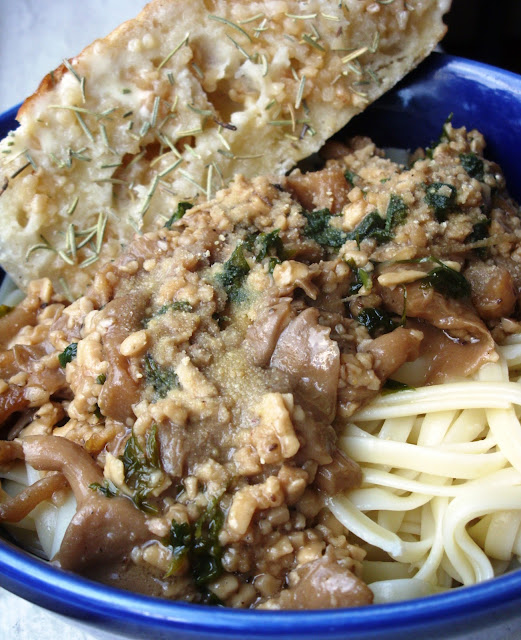 OK: before everyone gets all ruthless about how this looks, please remember we're veganizing this. I didn't use the photo with the sauce mixed in because it just didn't really show the sauce--and that's the best part!

Yes, using Oyster Mushrooms for clams is a very old trick. I can remember making vegan fried clams (Oyster Mushrooms) with my roommate in college and thinking we were so clever, until I went to a vegetarian restaurant in San Francisco and saw them on the menu. Oh. Que sera sera.

Just because vegans are some clever and creative folks doesn't make this recipe any less freaking delicious and amazing. Even if you don't like mushrooms; you can always replace them with vegan chicken or tofu and still have a dish that will bring the shock and awe.

I made this with Betty's Rosemary Garlic Bread. I think I'm going to make that again; I wish I had left the bread in the oven longer, so it would be more toasted, and had crushed my rosemary more. I grew up eating some pretty authentic Sicilian garlic bread and have had several different versions; you know every Tia (Auntie) had their own. I've had it with fresh parmesan mixed with oregano, and with melted mozzarella over butter and basil. Really, garlic bread is one of those dishes where Italian cooks can (almost unknowingly) leave their signatures. This version is pretty good, and went perfectly with the dish.

I have to admit I'm glad I'm only half Italian (I mean not like Frank & Dean are), but I'm Italian enough to tell you this dish is deliziosissimo (which is a real word - not a made up Olive Garden word).

Linguine with Clams in White Sauce


In a shallow bowl, mix the Worcester Sauce, Garlic Powder and Braggs. Then add the Oyster Mushroom tops (no stems) and let them marinade for 6 hours.


Prepare the Linguine per package instructions.

In your adorato little cast iron skillet, add White Wine, Olive Oil, Garlic and Margarine and heat on a medium heat. Stir occasionally. Once the Margarine is melted, add Vegan Clams and Marinade and let simmer for 30 seconds to a minute. Stir in Celery Seed, Fresh Parsley and Lemon Pepper. Once your Vegan Clams are the desired tenderness and the Parsley has begun to wilt, add the Sheese. Keep stirring occasionally. Once the Sheese melts, remove the sauce from heat.

Serve over Linguine with Vegan Parmesan sprinkled over the top and with some bread to really soak up this fantastic sauce... Rosemary Garlic Bread, perhaps!


OK; you're going to look at Betty's Recipe and ours and see some big difference in style. While I have endless respect for Betty, I had to go with my gut on this one and make this my way.

Butter each side with Margarine. Then, brush on the minced Garlic and sprinkle the Rosemary over the top in even coats.

Pop it in the oven with the Garlic & Margarine sides up, and let bake until they reach the desired golden color. Keep an eye on the bottom as well. It always sucks to have a perfect top and a burnt crust.