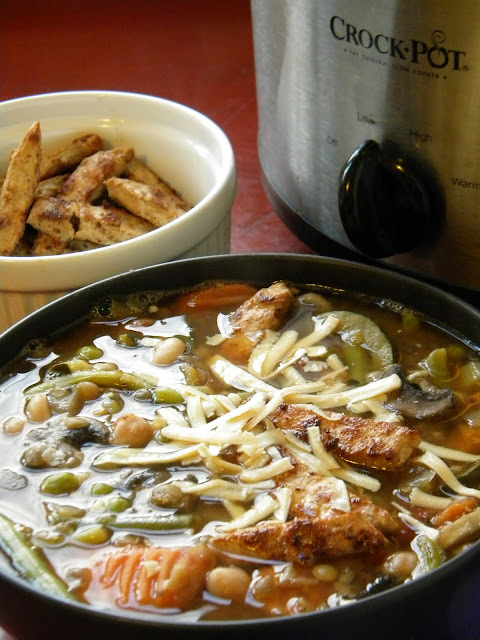 As some of you may have noticed, Annie hasn’t been around this week. She's not feeling well, so you’re all stuck with me, like when Mom goes out of town for the weekend and Dad’s in charge. Yes, we can stay up late and watch the Three Stooges marathon—but we can’t order pizza every night, because we have to do this blog thing. I hope you understand.
Since she can’t do much other than sit on the couch and feel lousy, Annie has spent most of this week watching the first three seasons of Star Trek: The Next Generation on DVD. I don’t think Gene Roddenberry himself ever watched this much Star Trek in one stretch. As the nerdier among you may already know, in Star Trek, the Federation takes pride in the fact that they “no longer enslave animals for food purposes”—they use their food replicators to create “something as fresh and tasty as meat” that doesn’t actually come from animals. So if you follow that thought to it's logical conclusion... obviously what I’m trying to say here is that Annie and I are from the future. There’s no time to explain. Come with us if you want to live!
But in all seriousness, or as close to it as I can muster, I think a slow cooker is about the closest we have to a Trek-esque food replicator in this day and age. Yeah, you still have to do all that primitive prep work, and you still have to wait a few hours like some twenty-first century savage—but once that’s all done, you just open the pot, and bam—food. And if you follow this recipe, you’ll have something as fresh and tasty as meat, without having to enslave animals for food purposes. Make it so!
Italian Chicken-Lentil Soup
Start by placing onion, zucchini, carrots, lentils, chickpeas, cannellinis, vegetable broth, Bragg’s, and pepper in the slow cooker. Set the slow cooker to low, and leave for about 5 hours. Feel free to burn through a quarter of a season of TNG while you wait. Check in on the soup about once an hour just to make sure everything’s cool.
After about 5 hours, you’re looking for your larger beans (the chickpeas and the cannellinis) to become tender. Once they are, add the mushrooms, tomatoes, Italian seasoning, garlic, green beans, and peas to the slow cooker. Still on low, leave it for about another 2 hours.
About 15 minutes before you’re ready to serve, it’s time to prep the chick’n. You won’t cook it in the slow cooker with everything else because it’ll get pulverized. First, slice the fillets into soup-sized chunks. In your parmaqqay cast-iron skillet, heat olive oil and liquid smoke over a low heat. Sautee the chick’n chunks until they’re nice and brown and crispy on all sides. The crispiness is important so that they hold up in the broth. When they’re done, remove from skillet, and pour any remaining oil and chick’n bits into the soup in the slow cooker to give it a little extra flavor.
To serve, ladle the soup into a bowl, add chick’n chunks to your liking, and top off with a little shredded smoked cheddar Sheese. Replicatorlicious.
Posted by Dan at 4:51 AM