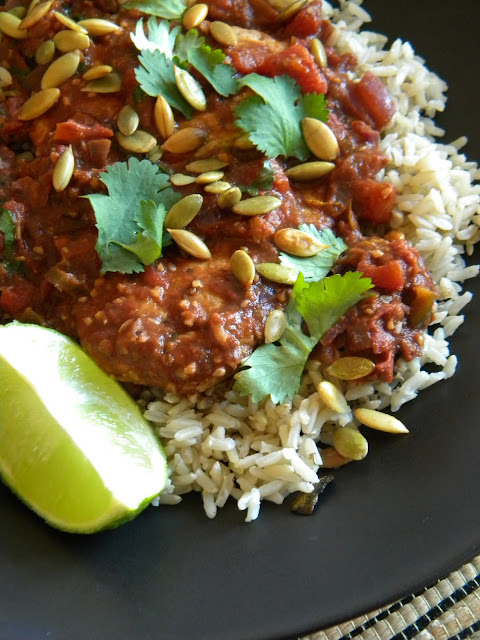 So we debated having a Best of 2010 Meet The Shannons post over the weekend, but they can always be found listed in the right hand side... and if we did that now, what would we do to celebrate our 1 year anniversary? Then, we debated publicly listing our resolutions so that you would all know our bad habits... but instead, we spent our nerdtastic New Years playing Heroes V in our living room, drinking fancy beer from Sri Lanka, and eating chocolate... and actually feeling pretty good about keeping most of the resolutions we made last year: buying organic, fair trade and locally grown whenever possible, being better about bringing reusable shopping bags, and being awesome.

Now, I know what some of you are thinking. Chicken in chocolate sauce sounds about as enjoyable as a real egg omelet full of skittles and tootsie rolls. But Mole is a traditional Mexican sauce that can differ greatly from region to region, and it does have dark chocolate powder in it--but the flavor is more like coffee than the sweet Easter-basket stuff. Really, in this version the cumin is the real star--especially once you squeeze the lime over the top.

Put your Vegan Chicken in a glass casserole dish and out them in the oven to keep warm while you make your sauce.

In the same skillet, add Diced Tomatoes, White Wine, 1/2 Teaspoon of Cumin, Olive Oil, Cocoa Powder, Hot Sauce and Cilantro to the cooked Red Onion Mix. Stir your sauce to make sure your Cocoa Powder doesn't clump. Then place your Vegan Chicken in the Sauce and then gently mix.

Serve over Brown Rice with Cilantro and Pumpkin Seeds over the top and with Lime Wedges.
Posted by Annie at 3:40 PM