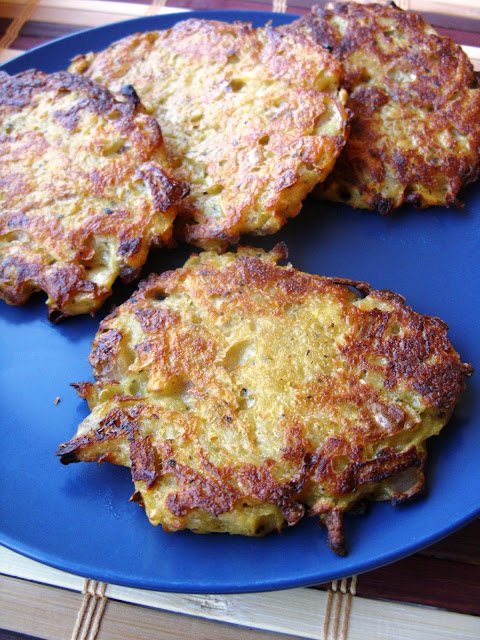 If anyone had told me there would be so many Latke recipes hitting the internet the first day of Hanukkah - Well let's just say I wouldn't have believed it. I had been looking forward to posting this recipe since I found it hidden in the Vegetable section of Betty's Big Red

under the title Potato Pancakes. But in a world of Latke recipes here's what makes this one special :
We've been enjoying these this Hanukkah with some Vegan Sour Cream while we watch basketball (How sad was it that Lebron didn't get his butt kicked last night? I'm not even from Cleveland but I don't like selfish people. That Gibson kid played his heart out though) and The Wire

( Can you believe Dan has never seen it? Really one of the best TV shows ever) ... We've also been playing a new game. We still love our Zombies but ya know it's cold and we wanted something we could play while I remain warm snuggled under 3 blankets on the sofa. Enter into our lives : Munchkins

Yes - This game is as adorable as it sounds and you how I love those adorable things. It is full of inside old school D&D and RPG jokes (Oh yeah - We're going there). It  makes sense since it is put out by Steve Jackson Games - the Milton Bradley of RPGs. Though Munchkins isn't a RPG - just a card game that requires you to be super competitive and turn on those you love the most with curses like Chicken on Your Head and Duck of Doom. So obviously it has become a pretty popular way to spend a quiet night at home for us Shannons.

But enough nerdery for today - here's a song to grate potatoes too.You have to at least enjoy the LARPing by this Jewish Boy Band  if not the tune.  Thank you goes to Rachel S. who sent this song after seeing our Matzo Ball Soup featured on Peta2's blog. Happy 15th Birthday Rachel!

OK that's a lot of chatter. Let's make some Latkes! OH and for you folks who are feeling left out - We're making gingerbread cookies and some other Christmas stuff this weekend!

Shred enough Potatoes to make 4 cups with either a cheese grater or food processor. Then mix in the remaining ingredients with the Potatoes in a large bowl. Spray a baking sheet with Olive Oil Cooking Spray.

Serve warm with the Vegan Sour Cream or Applesauce.  This will make between 12-15 Latkes.