Postcard from Boston! They may call it Beantown - but Vegans have way more options... 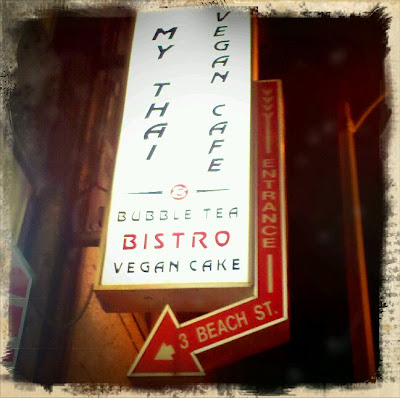 So you've probably guessed we've been away for Thanksgiving... well in Boston to be exact... Going to Celtic's games, visiting the Museum of Fine Arts and of course enjoying The Shannon Family vegan Thanksgiving! But when it comes to Boston they have a lot to offer as far as good vegan food besides what you find in the Shannon  kitchen...

The night before The Celtics beat The Raptors 110 to 101 in The Garden, we literally feasted at My Thai Vegan Cafe. We may have been a little too excited when we ordered because we got an appetizer, bowls of soups, 2 entrees and a beloved pot of green tea (that night was freezing) - which may sound like a normal meal but the serving sizes are so generous we had didn't have any room left for the gorgeous carrot cake they had in their bakery cases. Oh well - Guess we have to go back!

We started with Golden Triangles - which are medium sized fried won tons filled with a spiced fake chicken that came with a peanut sauce to dip them in. Dan was smart and got the Sweet & Sour Soup. This was some of the best Sweet & Sour Soups I've had since I moved from the Puget Sound area. It made me regret my Coconut Tofu Soup - which was also good but not a rock star like the Sweet & Sour. We both got entrees to share but really I'm not a great sharer when it comes to food. Dan's lucky I love him so much.

I got the Lemongrass Vegan Chicken and loved that I could actually taste the lemongrass. I adore the flavor and am often disappointed when it is over powered by salt or ginger. This was perfect. Dan took a chance and got the Tamarind Vegan Duck. I was worried it would be too sweet - a lot of times folks use jellies rather than fruit for the glazes and the sugar just kind of takes over. But the glaze was just the right amount of sweetness and savory and the vegan duck was firm and flavorful. The dish came on a huge plate surrounded by vegetables and was a meal on it's own. Man - I'm a getting a bit nostalgic just thinking about it.

But that's just one spot you should check out if you find yourself looking for vegan food in Boston...


Fiore's Bakery is a nice stop for fancy coffees, baked goods and huge wrap sandwiches... oh and of course everything is vegan. Of course the cupcakes are the superstars there... with such a wide variety to choose from and being so cheap - you'll want to treat yourself to a few. In the photo above clockwise: Chai Tea Latte (with Cinnamon Stick), Coffee Cake, Boston Creme (With a big Boston Red Sox B), Double Chocolate and Marble (My Favorite). I also got a Smokey Tofu Wrap because I think we all know my affection for "smokey" cuisine. It was just as good as those showy masterpieces above.

Grasshopper Restaurant is our regular stop in Boston... well Allston (near Cambridge). They have a huge menu full of vegan dishes that range from the super healthy to the fried mock meat dream dish! This is a tofu hot pot and you kinda can see my vegan won ton soup but I can't remember what the rest was... besides delicious!

It also happens to be next door to Peace O' Pie - a new vegan pizza spot in Allston that has filled the void left behind by TJ Scallywagles pretty nicely. All the vegan folks in Boston can't stop talking about it. Leading me to wonder... what is this power vegan pizza has over us? Whatever it is - I hope there is never a cure.