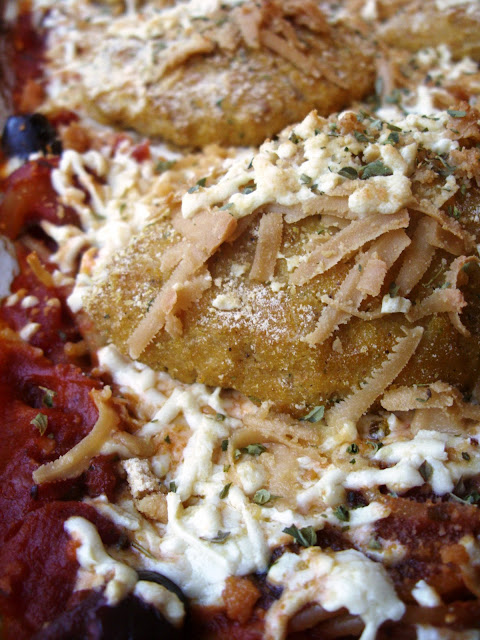 You may already know that Eggplant Parmigiana is a pretty old-school Sicilian dish, and super easy to make vegan. You probably already know the original dish is more heavy on the vegetables, and not baked over pasta. Though, you could also point out that there's an area in Italy called Parma, and that they often bread their cutlets with Parmesan cheese there - so Sicilians should stop acting like they invented eating. Even though they did. Just kidding. A little.

The chicken version of this classic Sunday dinner dish is more of an international take. In places like London, New York, and Sydney, Chicken Parmesan was transformed into a popular pub sandwich, or served over pasta in sit down restaurants. I think most of us have come to expect some form of that version when we have vegan Chicken Parmigiana/Parmesan for dinner. So this take is my hybrid of the classic vegetable dish I grew up with, and Betty's more American version.

I love how it turned out. We've made Vegan Chicken Parmigiana a few times in the past, and what I love about it is that no matter how many nights you have leftovers, it always holds up. We never feel an obligation to eat our leftover Vegan Chicken Parmigiana--we look forward to it. (Ed. note: I'm looking forward to it right now.) We're even a little sad when we finally polish it off. Which isn't something you can say about every dish.

I'm also looking forward to having one of these cutlets with some of the extra Marinara sauce on some of that organic bread I've fallen in love with. I mean, who doesn't love a good sandwich?

OK. Enough chatter. Let's do this.

In a large bowl, mix Bread Crumbs and Nutritional Yeast. Then, take the Match Cutlets and dip them in the Bread Crumb mix. You want to get a very heavy, even coat on all the sides of each Match Cutlet. If you used the Boca Patties, skip the breading steps.

Evenly space the Breaded Cutlets in a glass lasagna dish. You don't want them to touch; they'll get stuck together.

Bake for 10-15 minutes. You want the Cutlets to have a golden brown crust, but remember that they're being baked again over the pasta, so you want to pull them out before they're completely baked. If you decide to go with the Boca patties, use the baking instructions on the package as a guide for how long to keep them in there. Your patties will probably be thinner, but they'll also be frozen. So keep that in mind. After you pull them out, don't turn off your oven. You're going to need it at that temp for baking the final dish.

Marinara Sauce (heavy on the extras)


Toss this all in a pot (except fresh basil) and let simmer for around an hour. You need to stir it frequently, but not continually. Taste it a lot to make sure you like the flavor. If you want it more savory, add more Braggs. If you want a brighter, fresher flavor, add more Celery Seed.

Bake uncovered for 20 -25 minutes. You want the all the Daiya melted and the cutlets to be a deep golden brown. If you want to, get a a little bit of a crust to it - you can pop it in the broiler for no more than 5 minutes after the Daiya melts.

Sprinkle some Oregano over the top and serve with the rest of the Marinara sauce poured over the cutlet or on the side. You may even want to save a little extra to make a sandwich with one of the cutlets later... who knows? Evey day is a new day.