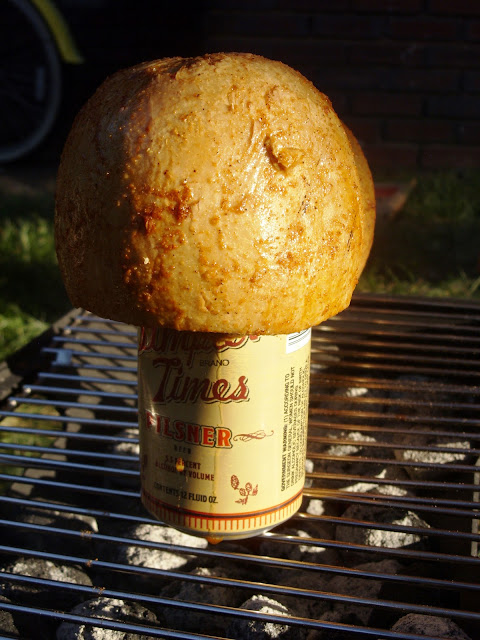 Beer Can Chicken is an American tradition. I mean, I never made one, or even ate one, before going vegan - but apparently people all over the country have. The second we saw this recipe, we began plotting our strategy for this impressive and somewhat ambitious grilling project. We discussed the challenges, such as stabilizing the Tofurky, and the differences between mock meat and, well, meat. We also brainstormed the awesome-ness that would become our "Beer Can Rub", and which brand of beer to use. A Shannon Offensive, if you will.

There's a bit to do, and we,ve included several photos to help walk you through your own Beer Can Tofurky - so let's do this... or how they say in Virginia... Git 'er done.

The Beer Can Rub

Heat oven to 200. Start your grill per instructions on BBQ or grill .

Take your thawed Tofurky and cut off one end about 2 inches from the pucker. When you look at your Tofurky, one end is more open than the othe; you'll see a bit of stuffing on that end. That's the end you cut off. With a normal spoon, begin removing the stuffing from the Tofurky. You're going to be hollowing out the Tofurky, so watch the sides to make sure you don't get too much of the Tofurky; you only want to remove the stuffing. Also, be careful you don't hold your Tofurky too hard and "crack" the side. Take your time and be kinda gentle with it. You'll notice that the empty tube in the center is not straight. Don't try to straighten it out by removing any Tofurky.

Place the Tofurky in the oven, hollowed out end down, for 5 minutes. This will help solidify the Tofurky.

In a bowl, mix the ingredients for the Beer Can Rub with a whisk to make sure there are no clumps.

Remove the Tofurky from the oven and let sit. Once it is cool enough to touch, bush the Tofurky with the Beer Can Rub, inside and outside.

Once your coals are ready to start grilling, you're going to open your can of Beer. Pour 1/2 Cup of the Beer into the bowl with your Rub and mix with a whisk. Take your Tofurky and very gently push it onto the top of the Beer can. Now, we made 2 of these, and one got a small split on the side when we were removing the stuffing. Once we placed it on the Beer can, the spilt grew. It ended up looking like the Tofurky on the left: 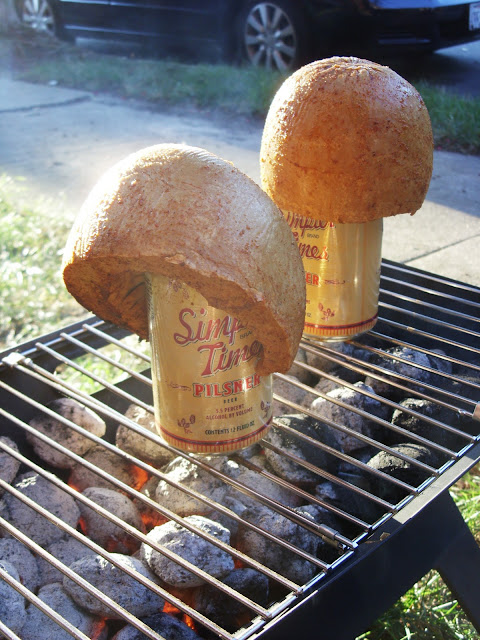 OK, not ideal - but it still tasted amazing. So if this happens, don't worry, just keep going and enjoy! Hopefully, yours won't do that if you're gentle with it.

Place your Tofurky with the Beer can in it gently it on the grill upright, so the bottom of the can is directly on the grill. See the photos above. While the Tofurky and Beer can are on the grill, periodically baste the Tofurky with the Beer Can Rub. Brush a little coating of the Beer Can Rub on your Tofurky to keep it moist and add flavor. Be very careful while you're doing this, to keep the Tofurky and Beer can from tipping over. The hole in Tofurkys isn't usually centered, so one side may be heavier than another. You really need to balance this just right and keep an eye on it to keep it from falling over. We suggest using a pair of BBQ tongs to hold the can while you baste for stability.

You'll notice that drips of Beer will start to roll down the side of the can; this is good sign. You want the beer to vaporize and steam up inside your Tofurky. Eventually you'll see beer steam come through the top of the Tofurky. Like this:

Once you have steam coming out of the top, and the outside of your Tofurky is the desired golden brown, use your BBQ tongs to remove the Tofurky from the grill. This should take around 30-45 minutes depending on how hot your grill is. When you move the Beer Can Tofurky, be careful to not spill the Beer inside the Tofurky. The can and Tofurky are hot, so don't touch them with your bare hands. While keeping your Beer can upright with your tongs, use your oven mitt to sort of pop the Tofurky off into a large bowl.

To serve, cut into chunks and maybe dip in your favorite BBQ sauce. But to honest, we loved it as-is. 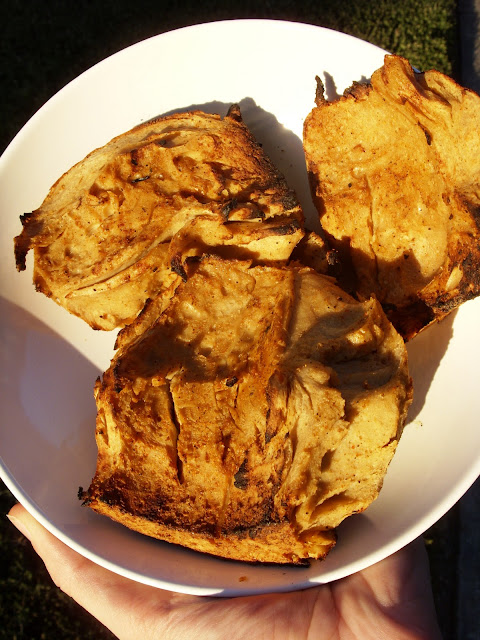 It had flavor and a unique smokiness to it. It also had a great texture, and really made something we've eaten a million times (Tofurky) into something completely new and different. I highly recommend trying it out this weekend. I think next time we may try it with some Match Vegan Meats Chicken.

We ended the night chatting by the grill and before Dan went in for his fantasy football draft, I roasted some of the leftover marshmallows from the Mexican Hot Chocolate cupcakes and pretty much ended my summer on a high note. 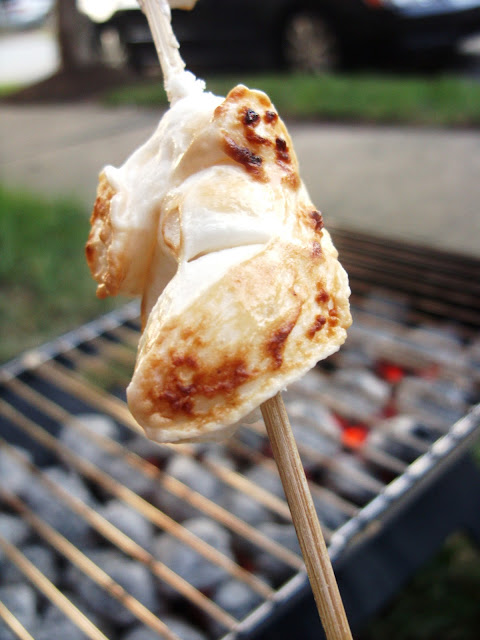