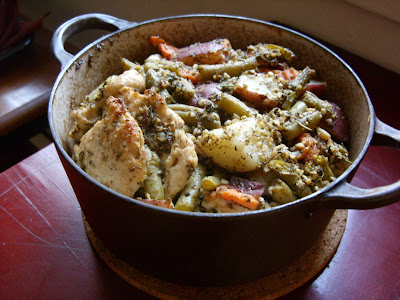 Get Ready - I'm about to say something absurdly pretentious.
I adore the French countryside.
It was 2005 and I was taking the train from London to Paris when I did something that could have been really stupid considering my limited French. I had just met with the gals at Cosmo UK about their "Nice Girls Fake It" campaign and their announcement that they would be fur-free. I was still jet-lagged and my train to Paris for fashion week left before dawn. I was over-caffeinated and it was raining . . . and for some reason as soon as my train lifted out of the dark tunnel into the rolling hills of France. . . I just found my face pressed against the window of the train like a child. The softly rolling hills hid these small charming cities like fish in the sea. Really if you weren't paying attention - you could miss them. The only thing betraying most of these little towns were these tall pointed church spires that reached high above the rooftops, vineyards and orchards. It took around 3 stops before I grabbed my suitcase and jumped off. This was really my one day "off" this trip. I had blocked it off for travel and figuring out the metro in Paris. Instead I rented a locker and walked around a city center that could fit inside an American Mini-Mall in galoshes and an umbrella. I ate a baguette and some compote de pommes (applesauce) with a pot of tea in a cafe' full of mismatched chairs and chipped dishes.
I know you are wondering why I am boring you with this. . . because the old guys sitting next to me at the cafe playing backgammon shared a small pot of something that looked just like this dish.
I remembered this day the second I pulled the pot from the oven and it made me wish that we had made it with Herbes de Provence instead of the herb mix Betty suggested.. . . I love Betty but I just think that the Herbes de Provence would add a little something extra. When we make it again, you can bet we will be using it.OK - I'll stop boring you now - Let's eat!

Heat oven to 375.
Boil Potatoes and Carrots till they are tender but not quite cooked. Drain and set aside.
In a small bowl, mix Olive Oil, Thyme, Marjoram, Braggs, Nutritional Yeast, Garlic, Lemon Pepper, Rosemary and Celery Seed. Grate 1 teaspoon of Lemon Peel into the Oil mix. Then cut the Lemon and add to the Oil as much juice as you can get from the Lemon.
In a large bowl, mix Fake Chicken, Potatoes, Carrots and Green Beans. Pour Olive Oil mix over the Fake Chicken and Veggies and stir gently to not mash the Potatoes. You want to evenly coat the Fake Chicken and veggies with the Oil mix.
Put mix in a small crock pot and roast in the oven uncovered for 30 to 45 minutes. You'll want to pull it out when the top is golden. When you serve it be sure and pour an extra spoonful of the Oil mix at the bottom of the pot over your food.
You're going to want to eat this with some bread - So you can mop up the extra Garlicky-Lemony- Herby Oil.  Just trust me.