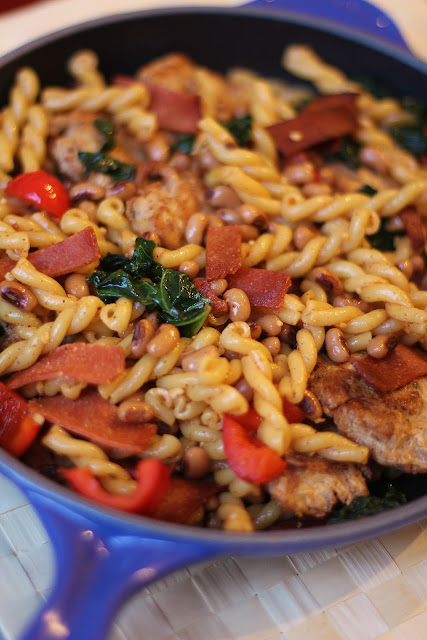 I debated if I should post this recipe today because even though this is a very easy and delicious dinner - the photos just didn't really show that. I mean this dinner has it all. There's leafy kale, Vitamin C packed red peppers, cute little back-eyed peas, smokey vegan bacon and big Creole kick. It's great.
It's also one of those almost one pot wonders that Americans have come to know as "skillets."

Back in my wasted youth, my friends and I used to call each other "Home Skillet" when we were feeling what Emerson called "the comradery of peers."

So I guess it makes sense that an easy dinner than requires less clean up would earn this term of endearment. I mean we loved it. During all the soul crushing recording of receipts and organizing papers that was going on around ehre last week -- there was this recipe to look forward to. Not just as a dinner but for lunch the next day as leftovers. Yeah. This dinner is my "Home Skillet." 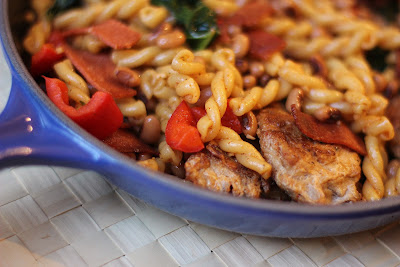 
Cook Pasta per instructions on the package. Once it's drained, toss your Pasta in a large bowl.

Coat your beloved cast iron skillet with Olive Oil Cooking Spray and heat over a medium heat. Once your Oil is warm, toss in Vegan Bacon and Vegan Chicken. Cook while flipping a few times until the edges are crispy and your Vegan Chicken is golden brown.

Remove your Vegan Bacon and Vegan Chicken from the Skillet and toss it in the bowl with the Pasta.

Then toss your Red Pepper, Onion, Kale, Black-Eyed Peas, Broth, Worcestershire Sauce, Creole Seasoning, Garlic and Fresh Parsley in you warm skillet and mix.You're going to want to cook your vegetables until your Peppers are tender but still crisp. Once your Peppers are just slightly soft, add White Wine and a few dashes of Liquid Smoke. Then using a ladle, move some Pasta, Vegan Bacon and Vegan Chicken over to the skillet and mix them together. There might be more pasta than mock meat than you can add to a normal sized skillet. Just add maybe 2/3 of the mix and then let it kinda simmer and cook for no more than 2 minutes tops.

Serve hot and with some Hot Sauce to double your heat or a cold beer to chill out.