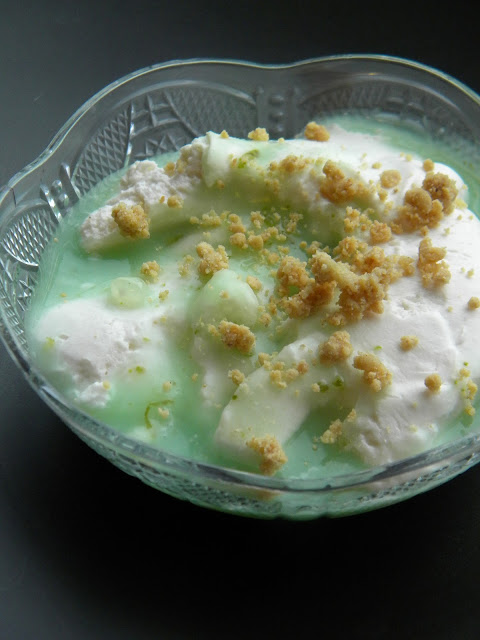 Recently there was a series of fortunate events which lead to this dessert coming into your life.
It began when we did a Twitter and Facebook poll asking folks what kind of pie they wanted a recipe for. It was a close race, but Key Lime definitely won. Then I went to check the Meet The Shannon's email to see if there were any write-ins and found a bunch of requests for Key Lime pudding from our last Pudding-palooza. I didn't even know that was a thing, but apparently Whole Soy Yogurt has an extremely hard-to-find Key Lime flavor that people say is amazing and are dying to have a recipe for. So the stars aligned, and like an anxious and whiny farm boy from Tatooine, we found ourselves swept up in a destiny that is bigger than we are, and definitely bigger than our kitchen... a force if you will.
Because you know... Adventure. Excitement. Heh. Vegans crave not these things*. It would appear they crave coconut key lime pudding instead.
Key Lime Pudding
Coconut Cream

Graham Cracker Topping
To make the pudding, mix Sugar, Cornstarch, and Salt in a large saucepan. Gradually stir in Water and heat over a medium heat. You want to whisk it constantly, until the mixture thickens and begins to bubble. Boil and stir for around a minute and then remove from heat.
Whisk in Margarine, Lime Juice and Lime Zest until the Margarine melts and the pudding is smooth. Now here's where you can decide if you want to add the Food Coloring. If you do add it, add one drop at a time and whisk it in thoroughly before adding the second drop.
Cover with plastic wrap and out in the fridge for 2 hours or until it is set.

While your Key Lime Pudding is chilling, add the ingredients for the Coconut Cream (except the Powdered Sugar) into a large mixing bowl, and blend with your hand mixer on a medium setting for 30 seconds. Then gradually add the Powdered Sugar and blend on the highest setting for at least 3 minutes. You want to stop adding the Powdered Sugar when the mix begins to get fluffy and smooth almost like whipped cream. Then cover with plastic warp and put it in the fridge for a half hour to thicken.
In your busy little food processor or blender, mix Graham Crackers and Agave Nectar until it forms little pebbles and crumbs.
To serve, spoon equal amounts of Key Lime Pudding and Coconut Cream into a dish and top with the Graham Cracker Topping. Don't forget to invite a few friends over to enjoy this with you! Dessert loves company.
* I may or may not have watched Empire Strikes Back the other night
Posted by Annie at 6:24 AM