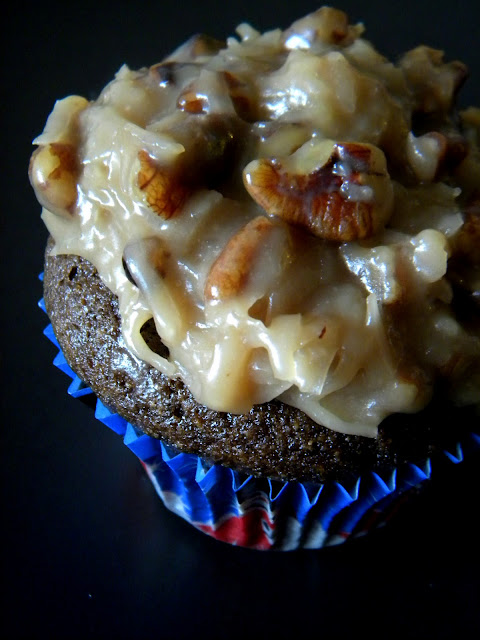 If you'd asked me a month ago why it was called German Chocolate Cake, I would have grasped at straws and guessed it had something to do with Germany, even though that doesn't make sense really. I mean, Bavaria isn't really known for their coconut trees. (insert shrug here)

The truth is that an English immigrant named Samuel German developed a certain type of sweet chocolate for the Baker's Chocolate factory in 1852 that became quite popular, so the company named it after him. Over 100 years later, a homemaker in Dallas, TX used Mr. German's signature chocolate to create this baking masterpiece, and shared her recipe with the world in the local newspaper. The rest is cake history!

I'm really excited to add our version of Vegan German Chocolate Cupcakes to our Pantheon of Baked Treats. Even though we didn't use Mr. German's chocolate to make it, I feel like these cupcakes really capture the spirit of this classic American dessert. And when you make it, please give a little tip of your hat to all those generations of creative and talented women who shared their recipes with us in newspapers and home journals. Here's to the first food bloggers!

In a bowl, mix Flours, Sugar, Cocoa, Baking Soda and Salt with a whisk to break up any large clumps. In another bowl, mix Oil, Vinegar and Vanilla with a whisk. Pour the Oil mix into the Flour mix. Then add Water and blend with an electric hand mixer on low for 5 minutes.

Fill your lined cupcake pan. fill each cup 3/4 of the way full. Bake for 30 minutes or until you can stick a bamboo skewer in one and can remove it cleanly. Cool for 30 minutes before frosting.


In a saucepan, melt Margarine. Mix in Sugar, Coconut Milk and Vanilla. Heat over a low to medium heat. Once it is blended and begins to bubble, stir in Arrowroot, Egg Replacer, Coconut Flakes and Pecans. Remove from heat. Let sit for 1 hour until it cools.