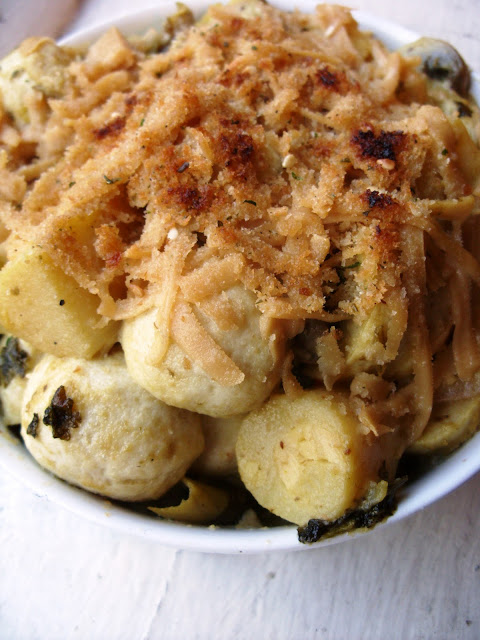 Welcome to the 3rd day of Vegan Mofo Meets The Shannons!
So Paris Vegan Day is just around the corner and I could kick myself for not having our cookbook done and prepping to get on a plane to France in a few weeks. Could these past few weeks have any more heartaches? I guess I shouldn't test that theory. Let's stay focused on the food.
I know what you're thinking... this isn't Vegan Shrimp Gumbo. I thought we were getting more Creole and/or Cajun food from you today. I'm sure there are other random curse words in there too... especially if you are thinking about last night's election results. But the lovely Leinana over at Vegan Good Things just posted a Louisiana Shrimp recipe, so I decided to mix it up! This brings us back to France.
Most folks think chicken fried steaks, green bean casseroles and impossible rainbow sprinkle layer cakes when they think Betty Crocker but this just isn't the case. This book has a serious diversity of recipes to it. Frankly that's one of the reasons we chose it. Much to my pleasant surprise there are quite a few pretty fancy French dishes in there and of course we all know how much I love being fancy and pretend French. Yes - I know how pretentious it sounds... The heart wants what it wants.
Coquilles Saint Jacques is one those pretty fancy French dishes. It was also one of Julia Child's favorite dishes - probably because it was French and included loads of heavy cream and a whole stick of butter. Ours is still a bit rich for vegan food but I'm sure it doesn't even come close to the real deal that besides the cream also includes Swiss cheese*. As you can also see if you clicked on the links above it is usually served on the half shell but that's not how we roll. Ours has artichoke hearts, white wine, a light sheesy savory sauce and of course hearts of palm "scallops" and our favorite Vegan Shrimp Balls. (snicker)
So let's enjoy our more compassionate yet infinitely lighter while remaining super fancy French dinner. Bon Appetit!
Vegan Coquilles Saint Jacques

In a sauce pan, melt the Margarine on a medium heat and then toss in Hearts of Palm, Artichoke Hearts, Sliced Vegan Shrimp Balls, Red Onion and Mushrooms. Let me brown a little and once they are tender add the Wine, Green Onions, Parsley, Herbes de Provence, Nutritional Yeast, Lemon Juice and Braggs. Let simmer for around 5 minutes. Stir occasionally.
Set your oven to Broil.
In a small bowl, mix Bread Crumbs, Italian Seasoning and Sesame Seeds.
Fill 4 4-inch baking/tart dishes with the Shrimp mix. Sprinkle Sheese/Daiya and then Bread Crumb Mix over each serving. One at a time put in the broiler for seriously the count of 10 - just enough to melt the Sheese/Daiya a little and brown the Bread Crumbs.

May I suggest you enjoy this with a glass of the dry white wine you were using earlier...? Um - Yes I may.
*I was going to include a joke here about "Holes" in the Swiss Defense during their game against England in the World Cup. But would any one really think that was funny besides me and maybe some English people? Hard to say.
Posted by Annie at 5:44 AM