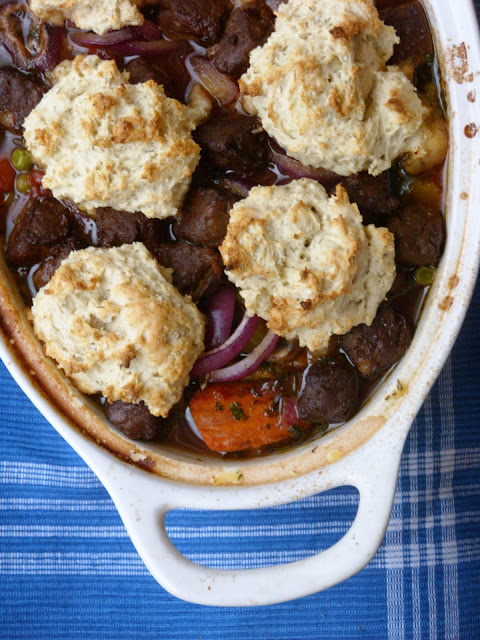 As we head into the junk food-chocoholic-sweet tooth paradise known as Halloween - we thought it might be good to post a fall dish that has lots of flavor & vegetables to help with those candy and cupcake hangovers we're all going to have.

I have to admit my favorite part of this recipe is the Herb Dumplings because they are a lot like The Betty Crocker Project's Garlic Cheesy Biscuits (that are pretty much one of my very favorite recipes ever). Another thing I love is that this recipe only takes about an hour to make as compared to the 10 - no joke 10 hours the meaty version takes and has none of the fat you would find in the 2 pounds of beef the original recipes calls for. This is actually a pretty light stew and we tried to keep it as traditional as possible while staying in the spirit of Betty's original recipe. I know I'm bragging now - but I think we rocked this one.

Don't forget that Peta has a $1 off Gardein coupon on their Facebook Fan page right now! Just "like" and print! Easiest buck I ever saved - plus their Facebook page is a rockstar too.

While your Gardein is baking you'll want to make the rest of your stew. In a large soup pot, combine the remaining Stew Ingredients and heat at a medium heat. Stir occasionally and when it begins to boil cover and reduce heat to a simmer. Continue to check on the Stew and stir occasionally. You will see a brothy liquid form in the bottom of the glass dish you are baking your Gardein in. Pour that Broth into the Stew and stir until mixed in. This is a good time to taste your Stew to see if it needs more Salt or Pepper. If you would like more Salt - I would suggest dashes of Braggs instead of table Salt.


You're going to let your Stew simmer for around 30-40 minutes. You'll want to remove the pot from heat when the vegetables are tender - especially the Carrots. It is kinda a judgment call on how tender you like your carrots. Some folks like them mushy - some don't. You are going to also bake this Stew for another 5-8 minutes so keep that in mind when deciding when to remove your Stew from the burner.


While your Stew is simmering, make your Dumplings.
In a large bowl, mix Bisquick, Sage and Thyme thoroughly before pouring in the Soy Milk. Stir it all together with a large wooden spoon.


Once your Stew is ready and vegetables are the desired tenderness, pour the Stew into a large casserole dish or Dutch oven. Then place the baked Red Onion Slices on top and then make a layer of the Gardein. What you are doing is making a kinda net with the Red Onion to keep the Gardein from sinking or soaking in the Stew. Then with a soup spoon drop spoonfuls of dough on top to make your dumplings. We tried several different sized spoons to see which was best and the old stand by soup spoon seemed to really be the rockstar.


Place the casserole dish or Dutch oven in the oven uncovered for 5-8 minutes or until your Dumplings are golden brown and you can remove a tooth pick from them cleanly. If you run out of Dumplings before you run out of Stew - don't worry - you can always use the Dumpling recipe again to bake up another side of extras. That may or may not be happening in our kitchen right now. OK it is.