Get the flash player here: http://www.adobe.com/flashplayer

What can I say? We go where the food is.

Back at the beginning of time when Dan and I went vegan, we hoped there would one day be a world where a vegan cupcake would kick ass on the Food Network, and where across the country there would be festivals dedicated to vegan food and saving animals. In our dreams, those festivals were packed with kind, smart, good-looking people. Sigh. Walking through DC Vegfest, we saw all those hopes and dreams come true!

There was booth after booth of delicious vegan falafel, nachos, baked goods, Ethiopian buffets... whatever. It was there. So were the people. The joke that this was actually "Line-fest" never got old, no matter how many times we heard it from folks (Ed. note: by "folks", she means me). Or maybe it was the hunger delirium that made everything hilarious. 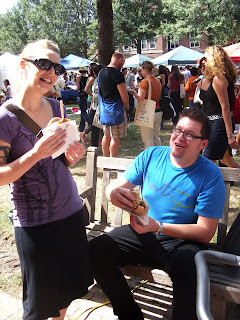 We went to hangout with Vegan Foods = Joy's Poster Grrl Sarah, her old man Shaun, and their new baby Spencer! Adorable Spencer! Cute pink jeans and chewy hands Spencer! GUSH GUSH GUSH. They were willing to stand in the Amsterdam Falafel line, and look how happy they are that they did.

If you aren't familiar with Amsterdam Falafel, you really need to be. In DC this legendary place offers you a handful of the best falafel in DC (in a town this international, that's saying something) plus all you can fit in a pita toppings, all for around $6. Seems simple enough, but in all our travels, around the world and the good ol' USA, Amsterdam Falafel is an all-time favorite spot for me. Little known fact: that photo of Sarah on our Facebook page was taken at Amsterdam. So was this one of me. Look how happy I am to be eating falafel.

Now, our other good friend and cookbook author, Marta, was there with her beaux Scott, but they opted for the huge plates of vegan nachos at The Bread & Brew booth. Which we opted for too, because the line was a bit shorter and we could share it. They were good, and the cheez sauce was remarkable, as were all the environmentally friendly plates and utensils all the booths were using. Every where you looked there was a recycling booth and a sign about how your fork was actually made of corn, not PVC. 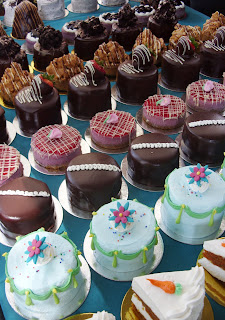 The real rockstars of the day, though, were at the Vegan Treats Booth. They had rows and rows of every kind of vegan baked dream come true, and a line that winded like the Mississippi. Yeah, it may have cut through a few states and reached the Gulf; hard to say. Everywhere you looked, though, there were folks walking around with little pastry boxes and big smiles.

These babies weren't cheap. $7 a cake, but they were just as ambrosial and intricately lavish as anything we saw in the upscale bakeries in Paris last year. Vegan baking has become such a respectable science that it's hard to imagine why anyone wouldn't choose a pastry with fewer calories and less saturated fat--let alone more compassionate--over their dairy and egg-laden peers.

But food aside, the best part of the day was seeing old friends and comrades-in-arms we haven't seen in years. Time flies by pretty fast, and you can sometimes forget how much you liked working or getting lunch with someone when you only see them on Facebook. Campaigns work is particularly hard, with folks always moving on to the next project or city. It was hard on the drive home to not nostalgically flip through the memories of how we all met and got to where we are today, and also wonder where we're going next.

I'll stop here before I get too emotional, but I will say this: since I was a little girl, I wanted to be part of something more important than myself. I wanted to live a big life, and when I left this planet, know that it was better because I did my best. When I think of folks who do what they can for animals, and are working everyday to mainstream compassionate living, I'm proud to play my part in it--and lucky that I found someone to share my life with who's an effective and creative activist who shares my hope for a better world for animals. And is a good kisser too...