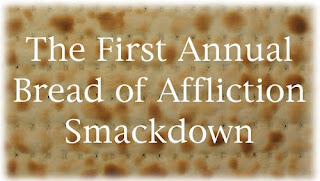 Re-posted from : Frost Street
PS - Don't forget to read labels to make sure your Matzah is Vegan & Kosher for Passover

Matzah may be the least palatable food ever devised by man. But for a week, we must eat it, or tempt the wrath of God. So I've taken it upon myself to find the least offensive matzah on the market today. I've collected all the varieties of matzah I could find in various supermarkets (21 total) and conducted a taste test to identify the tastiest matzah of them all. (That's Frost Street: Eating all the crap so you don't have to). Before getting into the tasting notes, I should explain the categories of matzah listed below. If you lack patience for all this detail, you can skip right to my recommendations.
Traditional Matzah: This is your garden-variety bread of haste, made from special Passover wheat flour and water (more on what makes the flour special in a second). Sometimes egg is added for flavor and body. The point is that these matzahs are perfectly suitable for the Passover table, and are mass produced so as to be widely available.
Shmura Matzah: This is the pascal equivalent of artisinal bread. The word "shmura" means "watched", a reference to the requirement that a rabbi watch every stage of production, from the harvesting of the wheat, through its threshing and milling, on to mixing and baking, to ensure that no water is introduced before its proper time. Shmura matzah is made in small batches, often of whole grain flour, and typically in hand-formed round wafers (distinguishable from the square shape of mass-produced varieties). Most shmura matzah is made in areas with large Jewish populations, and sold to the local community (the most notable exception being shmura matza made in Israel for sale in the United States). I have included in my tasting only one example of shmura matzah, found in a grocery store.
Designer Matzah: Much of the matzah on the market today is not kosher for Passover. Nine of the 21 matzahs I found fell into this category (six of them carrying the Manischewitz name). These matzahs usually contain added flavors -- some of them are even flavored with malt, a definite Passover no-no due to the fermentation taboo. No observant Jew may eat these products during Passover, and no rational creature would eat them if not compelled by religion or starvation to do so. Their raison d'être escapes me, but my guess is that there are many Jews who like to obey religious imperatives in spirit rather than in letter, so I have evaluated them all the same.